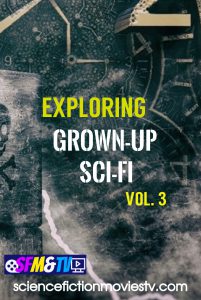 During our exploration so far of Grown-Up Sci-Fi we have seen how this genre has managed to successfully incorporate themes that are not usually part of a casual conversation on film and TV. The reason is the corporation of science fiction with these themes describing a “what if” scenario.

People are more willing to see this than a realistic drama. However, the “what if” negative scenarios are turning into reality very quickly. The creators started to include scenarios that give a reflection of our reality even though the story most of the time is set in the future. This provides an opportunity to discuss the theme and what can be done to improve the situation.

Grown-Up Sci-Fi is becoming more and more popular worldwide. There are many stories being told and many stories waiting to be told. So let’s continue our exploration right away.

Los Cronocrímenes (Timecrimes) is a Spanish science fiction thriller film that tells the story of Hector, played by Karra Elejalde, a middle-aged man who becomes part of a time loop, in which periods of time are repeated and re-experienced, by unknowingly hiding in an experimental time travel device build by a scientist. Hector is confronted with several versions of himself. When he ignores the scientist’s warning to let the events happen as they should without intervention, he is confronted with deadly scenarios. As a result, he must stop his other selves at all costs.

The film premiered on September 20, 2007, at the Fantastic Fest (U.S) and won the Best Picture Award, the Gold Medal of Jury Award, and the Silver Medal of Audience Award. The film received mixed reviews. On one hand, it is a film loaded with dark humor and brilliantly made as a time travel film with no special effects. But there are some minor setbacks in the story like the role of female frontal nudity and the fast-paced action and bizarre twists that at first glance don’t make any sense. Some interpreted the story as a reflection of adultery, comparing Hector’s confusing actions to those of someone who is desperately trying to hide an affair. Others have a more simple view of the story which is choosing between watch events happen as they should or change history. And be able to face the consequences of changing the timeline.

The film’s budget was approximately US$2.5 million, an amount that is considered as low budget but it doesn’t really matter when you see the final product. Even though at times the story makes no sense you are still engaged in wanting to know what Hector’s next move is. If low-budget films are able to find the balance between telling their story the way they want while staying within the budget we should support their work.  We have seen many “small” films that are greater than blockbusters which in some cases are just a disappointing viewing experience because the creators lost their vision and grip on the project.

Sleep Dealer is set in the future where a fortified wall ended unauthorized Mexico-US Immigration. While the U.S. is portrayed as a technological dystopia, Mexico is portrayed as a waterless wasteland. Migrant workers have been replaced by robots in the U.S., remotely controlled by the same class of would-be emigrants. These workers are called “Sleep Dealers”. They are connected to the network via suspended cables that plug into notes in their arms and back, allowing them to control the robots that have replaced them on the other side of the border. As you can imagine robots can continue the work nonstop.

The workers are called “Sleep Dealers” because they have to deal with working long hours, struggling with sleep, and trying not to break down from exhaustion. The workers performing virtual labor don’t get any medical insurance. It is the reigning time of the digital era and as such electronics and hacking are very popular in Mexico. Corporations, however, are not very pleased with the increased popularity of hackers and as such are allowed to take action. How? Drones with security cameras, machine guns, and/or bombs are used to intercept trespassers on land or in the network.

The hero, Memo Cruz, is a hacker living in Mexico. When it goes bad in his town, he moves to Tijuana to works as a “Sleep Dealer”. Through the film, you see the story from Memo’s point of view, the viewpoint of an outsider that yearns for access to technology and the power that comes with it.

The film was well-received by critics as a science fiction adventure in a dystopian future dealing with cyber labor and immigration. The story gives social commentary on issues that are very relevant today. Remember that this film was made in 2008, and then years later the idea of actually putting a wall is taken very seriously by the U.S. government.

In 2008 this was pure fiction, just an idea of what would happen if there was a wall. In the film, the wall represents the stop to illegal immigration and robots represent the stop of legal migration. The need to have workers physically does not exist and the requirement to provide them with any social benefits is out of the equation. Corporations are disturbing nature and acting as they wish with no consequence.

This film was made with a budget of approx. US$108,000, a very small budget for a Sci-Fi film, yet director and writer Alex Rivera managed to create a masterpiece as a first-time director/cinematographer. To be honest this film was out of my radar until 2016 when I first saw the film. Same as me there are many others who didn’t know about this film. Today, this film is the best choice to start a healthy discussion in schools, universities, community halls, and seminars, etc. about emigration and immigration which are topics we need to get more educated on in the West since unless we are descendants of natives we most probably are migrants. The elements of cybernetics make the story attractive for the youth and help bring the topics of immigration, human rights, employee benefits, and the power of corporations to the forefront.

Cloverfield is a 2008 science fiction horror film in the format of found footage, similar to the Blair Witch Project (1999), showing New York City residents feeling from a giant monster and other smaller creatures that are attacking the city. The film follows six young locals and shows the story from their point of view. Now before I lose you, let me tell you that this film is not a typical giant monster popcorn movie. J.J Abrams was inspired to create his own version of a giant monster movie when he visited Japan during the promotion of Mission: Impossible III. He wanted to create his own version of Godzilla, and he did. He called it “Clover”.

Prior to the film’s release, there was not much information about the film, which left the door open for online speculation shared on forums and websites dedicated to uncovering any hidden information about the film. In addition, the film had a very strong marketing campaign that included a prequel manga series and an Alternate Reality Game (ARG).

The film was released on January 18, 2008, created with a US$25 million budget is earned more than US$100 million at the box office. Based on the success of the film the franchise was established with 10 Cloverfield Lane in 2016 and Cloverfield Paradox in 2018. Each installment had its own marketing campaign including the ARG. The fourth installment is in the making which will be probably completed by next year.

The film was nominated for several awards and won the 2008 Saturn Award for Best Science Fiction Film, the 2008 Internet Film Critics Society Award for Most Experimental Film, the 2009 ASCAP Film and Television Music Award for Top Box Office Film, and the 2009 Fangoria Chainsaw Awards for Best Score.

The film franchise is part of the Cloverfield Universe or Cloververse as much of us call it. For those of you who are not familiar with the Cloververse, feel free to check my Beginner’s Guide. There is so much material to explore in the Cloverfield Universe that it is very difficult to understand why the film franchise is not yet at a decent level of success. We tried to provide some insights in the post “The Cloverfield Continued” and with the Fan film MEGAN, we really hope creators have open ears and open minds to bring the franchise back on the road of success.

Los Cronocrímenes, Sleep Dealers, and Cloverfield: what do you think of these films? Which film would you choose to see first or have you seen any of these already? Feel free to leave your thoughts and comments in the comment section below.