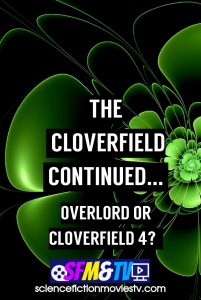 After the release of “The Cloverfield Paradox,” there were rumors of a 4th film in the Cloverfield Franchise that was planned to be released somewhere during the last quarter of this year, October 26 to be exact. The Movie was titled “Overlord”.

What’s Overlord about? During WWII American paratroopers are dropped behind enemy lines to carry out a mission crucial to the invasion’s success. But as they approach their target, they begin to realize there is more going on in this Nazi-occupied village than a simple military operation. They find themselves fighting against supernatural forces, part of a Nazi experiment.

But producer J.J. Abrams revealed at Cinemacon 2018 that the next Cloverfield movie is not the supernatural WWII rated-R film, “Overlord”, which is currently in development at Bad Robot. There had been rumors for months that “Overlord”, which is about a Nazi experiment gone terribly wrong in a small, war-torn village, would become “Cloverfield 4” but this appears not to be the case. It looks like “Cloverfield 4” will be an original idea designed to be a Cloverfield movie and is considered a direct sequel to the 2008 Cloverfield film. There is no release date known yet.

In the meantime, we are paying attention to the Viral Campaign or Alternate Reality Game (ARG) of the franchise by checking once in a while the website of Tagrauto, the Tagrauto Blog monitoring the Twitter account of the Slusho Truck among others.

Now, what was an ARG again? “Alternate Reality Game” (ARG) is an interactive networked narrative that uses the real world as a platform and uses multiple platforms and formats of storytelling to deliver a story that may be influenced by the players’ ideas and actions. In this case, The Cloverfield creative team is using mostly Viral Marketing platform for this game, a method of marketing whereby fans are encouraged to share information about a the Cloververse though the Internet.

Maybe calling it a game will be confusing for some people, let’s call it a “challenge”. The ARG has fake websites, fake accounts, and videos created by the Cloverfield creative team that gives out clues about the clever verse. Like the Slusho! Truck. This truck has a Twitter account where it announces where it’s going. Fans who follow it on Twitter knew where to find it. It’s basically like a challenge to get all the clues by following the fake websites, fake accounts so it’s not an actual video game like some people think.

You can’t jump in and start at the beginning at any time you want because the clues are given in real-time. For example, you won’t find the Slusho!  in the same place if you go look for it today. I know it’s basically difficult to follow all these clues but not impossible. Fortunately, there is a blog “Cloverfield Clues” that provides information about all the recent found clues and fellow fans of the Cloververse that summarize all the found clues in videos like the ones we shared on this post.

In addition, we can also speculate about the next installment, the theories of the franchise, and explore all the possibilities within the franchise and how the story can move forward.

Are you excited about the next Cloverfield movie? Would you still want Overlord to connect in a way to the franchise? Feel free to leave your thoughts in the comment section below.

2 thoughts on “The Cloverfield Continued…”