By now we know that Mass Effect is a Sci-Fi action role-playing third-person shooter video game series developed by BioWare, right? Remember we took a first look at the first game?

Wait, what was Mass Effect again? The title refers to the energy that is created through the use of the element zero. Element zero can increase or decrease the mass content of space-time when exposed to an electrical current via dark energy. Mass increase with a positive current, and decreased with a negative current. Too much science? Well, let’s see what the game is about then.

Mass Effect 2 is the second video game in the trilogy, a sequel to Mass Effect 1, released for the Xbox 360, PlayStation 3, and Microsoft Windows. The game takes place during the 22nd century, within the Milky Way galaxy, where humanity is threatened by an insectoid species known as the Collectors.

Commander Shepard is Back! 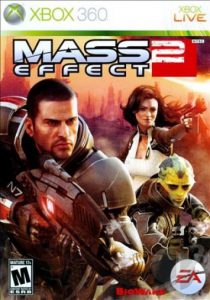 Commander Shepard is back!? Well, not really, the player can choose to assume the role of Commander Shepard but in this game, there are other character choices as well. Since this is the continuation of the first game there will be some references made to things that happened so you are warned of spoilers of the first game. Having Commander Sheppard back may seem strange since he supposedly died at the end of Mass Effect 1. In Mass Effect 2 the impossible becomes possible. Old friends will come back and new alliances will be formed.

The game offers dialogue choices that are polite and selfless or aggressive and hostile. These choices have an impact on how the other characters in the game react to Shepard, the rewards for completing missions, possible discounts from merchants, romances, and, most importantly, the Commander’s morality that is measured by Paragon (charm) and Renegade (intimidate) points. These points influence the availability of new special Paragon and Renegade dialogue options which could have a significant impact on the game going forward if selected.

Playing the game these are a few of the best-case scenarios depending on the choices of the player the narrative changes:

The commander gained a formidable reputation after his actions in Mass Effect 1. Many humans and alien species have heard about him, many believed him dead. In Mass Effect 2 he will embark on a new main mission with a new diverse crew onboard the Normandy, a crew that he personally selected. For combat missions, he will take his squad. Along the way, he will help his crew with their personal quests. Shepard has his/her own beliefs and stands by them. The player can choose Shepard as either male or female. Shepard listens to his/her crew, respects them, looks out for their well-being, believes in their abilities, and tries to push their limits. As a result, they respect him/her and stand by him/her as crew. Shepard will not take personal credit for the achievements of his/her squad.

The game features six different character classes for the player to choose from Adept, Engineer, Soldier, Infiltrator, Sentinel, and Vanguard. So for example when you choose the character of Shepard you could be a soldier, vanguard, engineer, or any other available class. Each class has a different set of powers and comes with different weapons. The game has several options to choose to take the game forward so the player decides which way to go.

The player can impact the story of the game in many ways with the decisions that are taken. And don’t worry it has a “saved game” option, where the progress of the player is digitally stored. Just imagine that you can import a character from a completed saved game of the first Mass Effect or start the game with a new character. Importing an old character allows several decisions the player made in the first game to impact the story of Mass Effect 2 and grants the player a set of starting bonuses. How awesome is this?

BioWare changed several gameplay elements in Mass Effect 2 and put further emphasis on third-person shooter aspects, including limited ammunition and regenerable health. In contrast to the exclusive focus on the main story of the first Mass Effect, the developers opted to create a plot where optional missions had as much intensity as the main mission.

The world of Mass Effect 2 is presented as a galaxy map that the player can use to find and complete quests. Most of the quests consist of combat missions, but some involve the player interacting with local characters during visits to settlements. As the player progresses throughout the game, different locations and new squad members become available. The player can win experience points by completing quests. The player “levels up” each time a sufficient amount of experience is obtained and is awarded Squad Points that can be used to develop powers for both Shepard and the members of the squad. These powers provide enhanced combat capabilities. Each power has four ranks that can be unlocked. Each rank costs the same number of Squad Points as its rank.

Released for Microsoft Windows and Xbox 360 in 2010, and for PlayStation 3 in 2011 Mass Effect 2 was a commercial success and received critical acclaim from video game critics praising the interactive storytelling, characterization, and combat. The game was nominated and won many awards, including Game of the Year at the 14th Annual Interactive Achievement Awards, and Best Game at the 2011 British Academy of Film and Television Arts Awards. The game is frequently referred to as one of the greatest video games of all time. Do you agree? I do. Well, to be honest, I haven’t played that many games so I may be a little biased.

Something curious about this game, at least for me, is the character of Miranda voiced by actress Yvonne Strahovski, initially the facial features were familiar to me and when I look her up I found out that she is the same actress who played the female lead in the TV series “Chuck” (2007-2012). When researching online I found out that it is very common for TV actors to perform voice acting work in video games.

There is no doubt, that the world of Mass Effect is interesting. Like any good game, it has a lot of information for the player to digest. I often wonder how experienced gamers manage to remember the background stories of all the games they play. With Mass Effect, there seems to be something new at every stage. It’s exciting to discover new things, right? Many experienced gamers like this game, some gamers I know even told me this is one of the less complex games, but for a less experienced gamer trust me it will be an exciting ride.

What do you think? Is Mass Effect 2 something for you? Are there any secrets of the game playing you would like to share? Feel free to leave your thoughts and comments below.