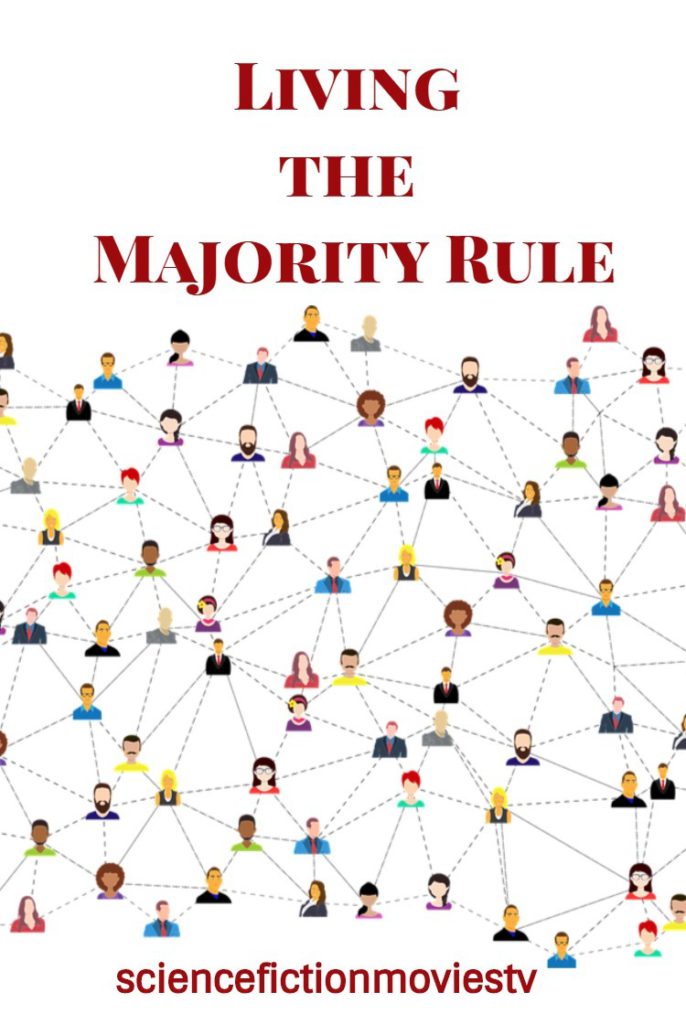 Majority Rule is the title of the 7th episode of the first season of the American Sci-Fi TV Show “The Orville”. It also refers to the principle that the greater number should exercise greater power. Majority rule is often considered to be a pillar of democratic decision-making.

The majority rule episode of The Orville presented a simple voting system of like and dislike that we are most familiar with through social media.

Every member of society has the right to vote on other members’ behaviors. The members with the most likes become very popular and are awarded rewards. Those with the most dislikes are judged and sentenced to jail and the most disliked person may even get a behavior adjustment procedure.

At first instance, I thought the episode reflected the obsession of social media to get likes but its more than that, about social justice. It also reflected what a society can become if it applies such methods but what if instead of the society voting, you had the government determine your score? In al honesty, I believed it to be just science fiction but I was wrong. If you don’t know already China is implementing a Social Credit system or a behavior rating system where citizens can be rewarded or punished according to their scores. The government or the state determines the scores, not society.

While the government hasn’t made the specific methodology used to calculate scores public, one’s ranking can fall for both major and minor infractions. Serious violations include drunk driving, embezzlement, and fraud. Much smaller violations that result in a lowered score include playing too many video games; spreading “fake news,” especially related to terrorist attacks, or refusing military service, will also lower one’s score. Sometimes people are declared “dishonest” for committing infractions the government doesn’t believe they’re truly sorry for.

The well-behaved citizens obtain rewards, and the less well-behaved get reprimanded and benefits and opportunities are taken away. For example, a citizen with a low score is not allowed to travel by plane or train but is able to improve the score by donating money to the government and performing community service. Within the rating system, surveillance also plays a role in determining whether or not something happened. There are cameras everywhere documenting the happening throughout the day. The facial recognition software effectively identifies any troublemaker.

This system promotes well behavior which is good, but it also promotes conformity. We are not perfect, and the way we grow is by learning and adjusting. Critics help us grow. The concept of constructive criticism is almost non-existent but it’s still needed. Criticism of the government is considered bad behavior. Think about government services that don’t work as they should. Criticizing them will give you a low score. It is a very difficult situation. If a government official is not doing the job, how do you report it then?

Activists are getting grounded by this system which is not ideal. There is always something that is not going as it should, and the activists are the first group to say something. By making it harder for them to work, it seems that it’s making it easier for people in power, who don’t have the people of the country at heart, to continue doing what they want.

This method gives the government a way to monitor its citizens, but China is not the only country doing this. Even though it may seem so in the mainstream media. The U.K. and the U.S. use surveillance cameras, Sweden uses a microchip implant and even the U.S. is planning for a satellite that will locate everyone around the world, project EarthNow. It all comes down to state control and power. That would be ideal in a world where the government works for the benefit of the people and respect the privacy of its citizens but we don’t live in that world. Governments work for their self-interest in favor of their donors, corporations, and the establishment.

We need to be more critical of the people we vote to represent us and our interests and privacy are one of those interests. Be more critical of where they are getting their financing because that will matter when they get elected. They will serve those who financially helped them get there.