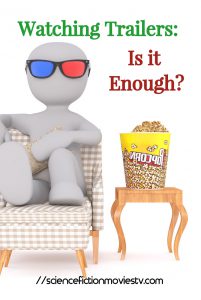 Trailers are made to help the public decide if they will be interested in watching the movie right? But is this the only purpose of a movie trailer?

A movie trailer is supposed to give you an idea of what you are getting into if you decide to watch the movie. There are currently two types of movie trailers, the teaser trailer which teases you a little bit about the movie or series. The content of this trailer doesn’t reveal a lot of details, but it should be interesting enough to get your attention. The second type of movie trailer is what we call the normal trailer which in many cases is used multiple times during the promotional campaign for the movie. There are usually two trailers. The first trailer reveals only a little detail about the story. The second trailer should be even more captivating than the teaser and the first trailer. It should be compelling enough to convince viewers who are still indecisive. Basically, many people make up their minds whether they will spare their time to watch the movie after viewing the first trailer.

So far, with the information, we have told you everything is supposed to be fine, and there should be no issues with trailers right? Movie trailers should help the public decide what to watch. However, it is unfortunate that these days watching a trailer is not sufficient to make that decision. They are simply not serving their purpose. Why is this happening? I don’t know what is happening with the divisions that create trailers these days but there are many issues with the recent trailers been released.

Let’s start with the movie trailers that reveal the main story directly. If you already know what is going to happen after watching the trailer then what is the point of seeing the movie? Also, it is not a good idea to show the third act of the movie. As it seems, the production crew who makes trailers are a separate group who have no idea about the movie’s storyline. There are trailers that don’t show the essence of the movie which can mislead the public to have a wrong impression of the movie; this can make people overlook the movie when it is released subsequently causing it to perform poorly in the box office.

So far we have been discussing bad trailers, now let’s talk about the trailers that look good. These are the trailers that can convince a big part of the audience to watch the movie which ends up falling short of expectations. It turns out that the movie is not as thrilling as it seemed in the trailer. In this case, the trailer served its purpose and the public was hyped to see the movie, but the content that was delivered was not satisfactory. This is our current situation, watching a trailer is not enough to decide whether the movie or series will be worth your time.

Feedback from the public has become important after a movie has been released. It is even more important that moviegoers should do some research in addition to watching the trailers. It is easy to get feedback about movies you are interested in watching from social media. However, there will be some fake stories online. Don’t be too hasty to believe the first story that trends on the internet about a movie. So, you need to keep an open mind, compare the social media feedback with the movie trailer you have watched to help you make a final decision.

6 thoughts on “Watching Trailers: Is it Enough?”