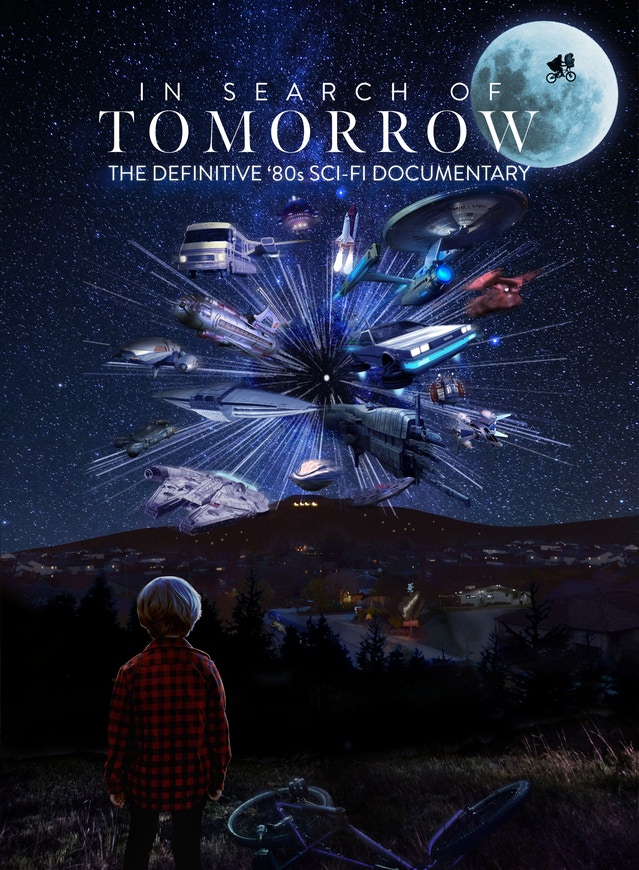 A tour of the ’80s most important Science Fiction, “In Search of Tomorrow” suggests that an eye on our cultural past may yet help reveal a path to a renewed, and tempered optimism.

The documentary “In Search of Tomorrow: The definitive ’80s Sci-Fi Documentary” examines compelling insider tales of the creative process, the resonating themes of these imaginative stories, the technology behind the fiction & their futuristic forecasts, the bold marketing of these films, and the political and Cold-War climate that impacted our entertainment.

In Search of Tomorrow was written and directed by David Weiner.  The documentary has more than 300 minutes of fascinating content and covers fan favorites Sci-Fi movies such as Flash Gordon, Star Wars, Blade Runner, Superman, Ghostbusters, Mad Max, Terminator, RoboCop, Predator, Aliens, Back to the Future, E.T., Short Circuit, Star Trek, and many more.

A MASTERCLASS IN SCI-FI

It is very interesting the hear the directors talk about what they wanted to achieve and learn about the experiences of the actors. These used to be the extras on the DVDs which they don’t do anymore because of streaming.

Learning about the technology used, the techniques to create the costumes & effects, and learnings how the movies were marketed is completely fascinating.  It should be a masterclass for the current filmmakers and marketing departments that don’t seem to know how to make their films right.

Setting up rules for the story and following those rules like it was done for Back to the Future seems to be very straightforward forward but it’s something that has been lost. Current sci-fi doesn’t seem to follow or have any rules, especially those dealing with time travel or those that are part of a franchise with established rules like Star Trek.

In the 80s they put the effort to create the best for everything including poster art, music, and physical media. You can find physical media these days, but they just come with the movie and a few extras, sometimes with none. It is not what it used to be.

The package was a work of art and sometimes you get extra goodies such as monoprints and booklets. You may find collectors’ editions here and there these days, but they are very limited. And most of the time they come in Blu-Ray which is more expensive than DVDs.

In the documentary, they discuss the importance of the opening score and the complete soundtrack such as Star Wars, The Last Starfighter (1984), 2001: A Space Odyssey (1968), and Ghostbusters (1984) which were timeliness symphonies and songs with iconic lyrics, not a one-time forgettable hit song. 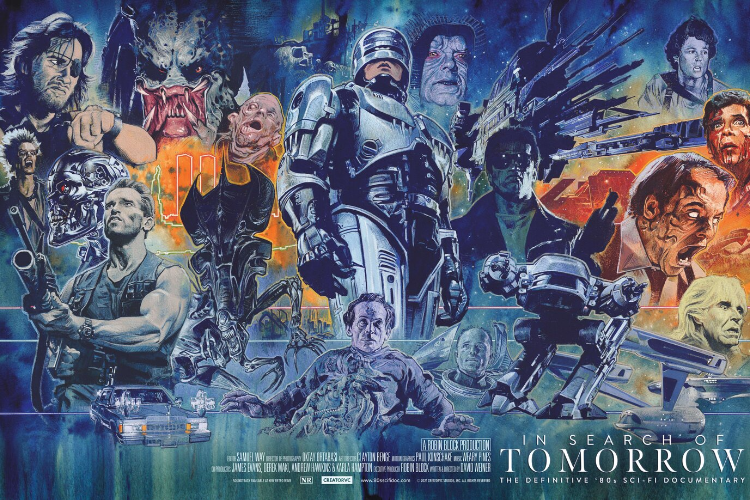 Entertainment companies focused so much on streaming they forgot the most important component needed for streaming to work, the internet. Ideally, they should have invested in the internet infrastructure before investing so much in streaming, but they didn’t.

There are areas in many places of the world with no internet. In places that have internet, the user experience may not be good because of the density of the population and or the usage of the internet on certain peak hours which leaves you with a bad streaming experience. That loading circle gets very annoying.

For me physical media remains important, it’s the best way to watch movies whenever I want without needing to take into consideration whether it is a peak streaming hour or not. Unfortunately, not all movies come in physical media anymore. There are so many of the movies shown that I want to see and hope to find them still in physical media. Fingers crossed.

RESPECT NATURE. RESPECT EACH OTHER

Through the documentary, the message to save the environment constantly comes up. Nature changes naturally and reacts to what humans do. Especially after the difficult period, we went through I hope people see that nature had nothing to do with it. Humans will destroy humans faster than nature does with nuclear wars and viruses.

In the search for looking for sustainable alternatives such as digital devices, the resources needed come at a price that mostly poor nations in Africa and Latin America pay. People don’t want to talk about e-waste and its danger to human life.

Once we realize that we must respect mother earth and each other lives equally, stop looking for conflicts, and let each other live the life they want to live then we will make a change.

In the documentary, there is a section titled “The Cold War Kids”. It explores all the movies that were made on the topic and how much impact the possibility of nuclear war had on the people from the West and Europe. People feared War.

THE VALUE OF HUMAN LIFE

During the last 2 decades, there have been many wars in the Middle East and Africa mainly for resources, some are still going on, the difference with the cold war era is that people from the West and Europe don’t care about them because it’s not their war even though their government is highly involved in them.

Now with the Russia/Ukraine war, the chance for a nuclear war increased but you see how different it seems to be. Only a few people are expressing their concerns about it.  And you can also clearly see a difference between the reaction to the Ukraine Conflict versus the conflicts in the Middle East and Africa.

When you see the images of war, you realize that climate change is not the main priority, respecting human life is. Invest in infrastructure, healthcare, education, businesses, innovation, etc. Things that will improve the lives of people and take them out of poverty. Now it seems that human life is less valuable to governments than the environment.

For example, if helping the environment means destroying the lives of farmers it will be done. Even when the effect of “helping” the environment is very small. It will not make a difference if everyone else is doing what they want, especially those that have a larger population impact such as the military. Nobody questions all the air flight training, and bomb testing on land and at sea, these have a much larger impact on the environment than cows.

In the documentary, there is a reference to Mad Max (1985) and how it foresees the future when we keep fighting for resources for enrichment and forget that human life is valuable and should be respected. What most of the science fiction stories from the 80s have in common is humanity and how important it is, which seems to have been lost in modern sci-fi.

INSPIRATION AND SELF AWARENESS

Like Space Balls who made fun of Sci-Fi movies while still respecting the source material, I hope to see Sci-Fi films making fun of the current crazy state of the world. The documentary shows that there is still hope to learn from the old teachers.

Aspiring filmmakers will be truly enlightened and inspired to take some of the teachings and implement them in their art. Watching the documentary I have more appreciation for films such as RoboCop learning about the difficulties, challenges, the not so clever decisions, the commentary on societal issues, and the critics of capitalism. They had to courage to criticize capitalism something that can’t be honestly done today.

It is remarkable how the message of the Running Man (1987) slowly became real. How we as a society don’t really care what is shown on screen as long as we are entertained. That is what is realized by social media, especially on Twitch where people do the craziest things for money. Part of Humanity and stories that focus on humanity is to acknowledge that we are not perfect. Seeing stories of people overcoming large obstacles is inspiring. 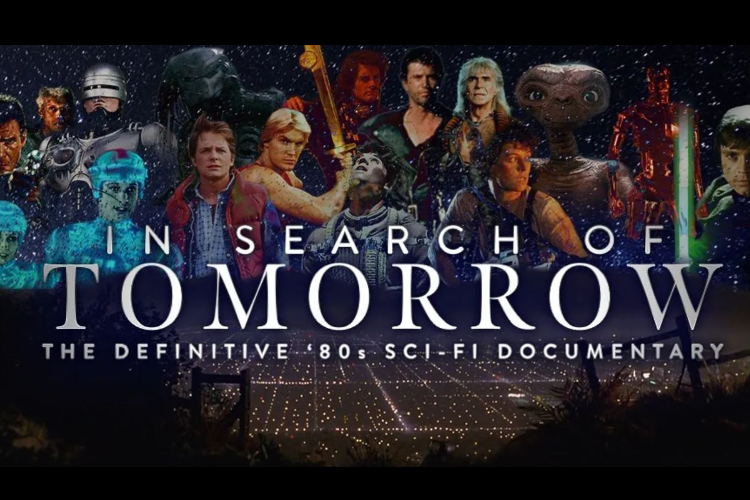 THE TECHNOLOGY OF TOMORROW

Science Fiction writers are writing and developing the blueprints of the technology of tomorrow. It is a wonder when we think that the computer power in our smart phone is way more powerful than those in old computers. Drone and tracking technology are now part of daily life.

Facial recognition and deep fake technology are next in line in becoming mainstream. The problem is that we have people in charge that may use the technology in the wrong way without any repercussions. For example the use of drone technology in conflicts in the Middle East, and the use of tracking technology without the users’ consent.

It is mentioned in the documentary how we, in the era of algorithms and data collection, are already living with a version of Skynet. But it raises the question if we have systems in place that gives us the benefits of new technology and the necessary tools to prevent the negatives. It seems that those tools always come late. Governments are way too slow and it always takes a disaster for them to take action. However, the action taken is always over the top. Sometimes it’s too restrictive because they don’t understand the technology.

WHY DO PEOPLE CARE

The documentary also explains why people want to preserve the franchises they love. It is something that you cherished since you were a kid. Growing up people change and tend to forget what it was like to enjoy their favorite movies. So, they will go back and watch it again to relive their childhood and will be involved in having an opinion on everything related to it. Filmmakers of the era were like that.

It also explains why tarnishing that memory is so cruel and detrimental to the genre. If modern science fiction keeps going on its current path there won’t be in decades to come people that will care to preserve them as the older generations do. The magic of sci-fi is that it transports you into the world of tomorrow today: it is escapism from the daily stress of an adult’s life.

The documentary reignited my interest in science fiction which was severely affected by the most recent movie versions of IPs I liked such as Star Trek, Star Wars, Terminator, and MIB just to name a few. There is so much I have not seen from this decade that looks entertaining.

There are so many movies they didn’t talk about in the documentary. You can see them in the collage of posters when they discuss the movies year by year. With so many materials to discuss they can make many more documentaries.

It is also important to take into consideration the old age of all the artists from the 80s. The time to reconnect with them is now. Make the brand “In Search of Tomorrow”  the definite 80s sci-fi documentary series.