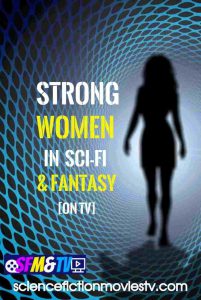 The misogynistic perception of a strong woman sees the woman as someone who musters her strength only after facing a tragic loss and is only able to move on and become stronger with help of a supportive mentor, friends, family, or even lover.

In our previous article, we have some examples of books and movies that have adapted this image of strong women. Despite this notion, many Sci-Fi and Fantasy novels and TV series came up later with such strong female characters which led to a rapid paradigm shift in the perception of being a strong woman in a story.

They gained a cult following, and attention from academia and fandom alike for the idea of a strong woman being someone who is just raised that way. Women can be as strong as men without having failure as motivational bait. Here are a few examples that redefined the perception of a strong woman on TV:

I can’t start this list without having a special mention for the character of Nyota Uhura in Star Trek Original Series (1966-1969) played by Nichelle Nichols. She was one of the main characters of the series, in an equal position to all her male counterparts. It was the first time we saw an Afro-American female in space on television. The Swahili word Uhuru means “freedom” and this word was adapted by Gene Roddenberry into Uhura after discussing the idea for the character’s name with Nichelle Nichols.

She joined the Enterprise as a lieutenant and showed to be a capable bridge officer, able to take over the running of the navigation and science stations when necessary.  This character is remembered by many for many reasons. Her portrayal resonated with the audiences around the world but not with producers who didn’t green-light more projects with characters like her until years later.

This American fantasy television series was praised by critics and audience alike for its strong female protagonist. Xena, played by Lucy Lawless,  started as a villain in the Hercules TV series. In her own series, she has changed and started fighting the evil but had the baggage of her dark past because she was the villain.

She uses the fighting skills she has gained from her past to help the innocents against ruthless warlords. So she hasn’t been any weak or timid in the past, neither she has suffered any tragedy. She is raised as a warrior, as a bad-ass woman who is using her formidable fighting skills to now helping those who are unable to defend themselves.

Stunningly beautiful and highly religious, this highly driven model is marked by ruthlessness against all who stand in her way. She used her beauty not to get any kind of leverage but as a weapon against her enemies.

The character was so loved that in 2006, Tricia Helfer (the actress who played Number Six) was awarded the Leo Award for “Best Lead Performance by a Female in a Dramatic Series” for her role as Number Six in the episode “Pegasus“. Different versions of Number Six showcased multiple characteristics of strong women. Her character can be selfish in some cases, selfless when required, knows when to follow her head and when to follow her heart.

Kara Starbuck Thrace, played by Katee Sackhoff, is a hot-headed and cocky fighter pilot, considered the best in the fleet, but with a tendency to challenge authorities and get into trouble. She enjoys drinking and smoking cigars.

A strong woman doesn’t let the cattiness of other women bring her down. She has the utmost respect for herself and what she believes in.”And this attribute of a strong woman was emphasized by Kara when her mother was not content with her daughter’s military record. But Kara continued her journey through all the odds and didn’t dwell on her past mistakes and went on becoming a mesmerizing feminist icon.

Sarah Manning, played by Tatiana Maslany,  is the lead character and main protagonist of the series, Orphan Black. Caught in an unusual conspiracy and fighting her way through it, Sarah displays the other side of woman-motherhood-how a strong woman can be so willing to love her child and yet tip off a domino-effect of changes to the society.

River Song, played by Alex Kingston, is raised as an assassin but ends using her strength positively. She is one of the few female companions of the Doctor on this classic series and is capable and strong. She was kidnapped as a baby, brainwashed, and raised to be an assassin. She then meets the Doctor and falls in love with him, despite living her timeline in a different direction, again showing how a woman can balance all her emotions. Through it all, she’s hilarious, quick with a gun or a punch, emotional, and always a woman.

Though stone-cold on the surface, Olivia Dunham, played by Anna Torv, is the heart and soul of Fringe. Unafraid to stand up to her superiors, she investigates the upside world of fringe science on her own. Olivia was successful in showing that a strong woman can love and yet be courageous and determined, making her one of the people responsible for not only saving the world from the incursion from another timeline, but also from the threat of invaders from the future.

Dr. Scully, played by Gillian Anderson, holds a degree in physics and is a qualified doctor. As the deadpan, witty foil to her partner Fox Mulder and his faith in the paranormal, she escaped the role traditionally reserved for female characters in the genre. She was a brave, bad-ass nerd who alternated between thoughtful silence and matter-of-fact polysyllabism.

In general, the content on TV has become better over the years. The writing and filming on TV is a strong competition for cinema. Working on the development of strong female characters on TV has been recognized as valuable and that led to many successful series. In films, they have just starting to recognize that now.

Do you know more strong female characters from other Sci-Fi or Fantasy TV series that inspire you? I’m sure you do. Let’s put them in the spotlight!

Feel free to leave your thoughts and feedback in the comment section below.