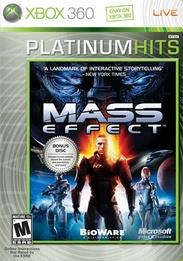 In this post, we will take a first look at Mass Effect 1. This is for all of those people who are not familiar with this video game franchise. If you’ll still reading, that means that it’s you’re first time hearing about this game (well not really if you’ve read my previous post), you don’t know much about the game or you’re a fan and you are curious to know what’s ahead. So let’s begin:

Mass Effect is a sci-fi action role-playing third-person shooter video game series, the first in the trilogy, for the Xbox 360, PlayStation 3, and Microsoft Windows. The Video Game series was developed by Canadian Company Bioware and first released was on November 20, 2007.

Mass Effect received critical acclaim from video game publications and sold more than one and a half million copies as of January 2008. Critics praised the game’s interactive storytelling and cinematic design but criticized its unbalanced combat mechanics and poor artificial intelligence.

The story of the trilogy is mostly about an elite human soldier named Commander Shepard, whose mission is to save the galaxy from a race of powerful mechanical beings known as the Reapers and their agents. The fourth installment of the game takes place 600 years after the trilogy.

The game revolves around the choices you make in the role of Commander Shepard. Some characters die, some characters live, some hate you, some love you, but it all revolves around how you play the game. The game-play requires the player to explore a galaxy map to find and complete quests. Most of the game’s main quests are combat missions, while secondary quests generally involve the player gathering items or interacting with non-player
characters.

Commander Shepard can either be male or female, depending on what you prefer. You do have the option to manually adjust and modify how Shepard looks. You can also choose a first name.

The story is about a soldier but you can choose to be something else. The game has 6 character classes you can choose from. Each class has different talents that provide enhanced combat capabilities (1):

Biotics is the ability of some lifeforms to create mass effect fields using element zero nodules embedded in body tissues. These powers are accessed and augmented by using bio-amps. Biotic individuals can knock enemies over from a distance, lift them into the air, generate gravitational vortices to tear obstacles or enemies apart or create protective barriers (1).

The story of the Game

The main story of the game revolves around humans being the new race that joins the galactic government (The Council) in the Milky Way galaxy during the year 2183 CE (Council Era).

Other civilizations that have been part of this government for thousands of years, don’t really like that the humans joined so fast and so soon. All details are explained in the timeline  but for now, this is in simple terms what you need to know:

The galactic government or “the Council” consists of 3 races (excluding the human race). Each of the Council races has general characteristics associated with the various aspects of governing the galaxy:

The Council operates for the Citadel, this is a colossal deep-space station that serves as the capital of the Council and constructed by the long-extinct Protheans. The Protheans are an ancient alien race which mysteriously vanished over 50,000 years ago. Protheans have been credited with creating the Citadel and the Mass Relays.

Then during the mission that was supposed to be Shepard evaluation to become a Spectre, one Spectre went rogue and the council named Shepard the first human Spectre in order for him/her to handle this situation.

A Spectre is a top-secret agent that the galactic government appoints, they are above the law and only respond to the Council.

So you (the player) as Shepard have to take your crew and hunt down this specter after this the game opens up and can explore the whole galaxy. During your quest of hunting down the rogue, you will on-cover a bigger and more menacing enemy that will threaten every life-form in the galaxy and learn what really happens to the Prothean civilization.

Now as the first human Spectre you are viewed as an ambassador.  Every decision you choose will have an impact on your and the other civilizations. Mass effect is heavily on how your choices impact the game.

As you’re playing you’re developing paragon & renegade attributes, those are developed depending on what choices you did make, and the level of paragon or renegade will open new dialog options that can help you save a situation from going ballistic.

The story feels like it hangs on your every move. Mass effect is an action RPG (Role Playing Game).  The game has a bit of a learning curve where you will have to get used to move around and learn how to use your class abilities during missions. You will always go with a team of 3 and you can give them the command to take cover and use their abilities to attack.

But we have to come back to the stories in mass effect. There are many stories in the game: almost all your crew and people you meet have a background story.

Many agree that the game has the best voice acting. Even after almost 10 years since it came out and with all its flaws the game still holds up.

Mass Effect 1 will feel old school for some players that are used to play more modern games but the well build stories, established characters, and voice acting talent are still considered the best elements of the game. The game has a few flaws compared to modern games but it’s still worth a try.

Mass Effect 1 will be more fitting for people that are willing (and committed) to emerge in the world of Mass Effect the “Mass Effect Universe”. You will get a lot of information in the game about the lore itself and big events of the past.

You definitely won’t get bored! 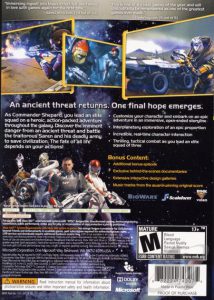 What do you think of the character creation and the story of Mass Effect 1?

Were you familiar with this game or is it the first time you’re hearing about it?