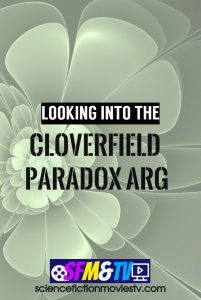 Let me begin by stating that this is not a review of the movie. My objective is to give you helpful information that you will find very useful when you watch the movie. Consider this an exciting puzzle that you will enjoy solving.

If you haven’t seen the previous movies, I strongly recommend that you watch the first or re-watch them again to get a deeper insight into the Cloververse.

The movie “The Cloverfield Paradox” contains many clues which can be observed right from when the movie starts. Listen carefully to what Mark Stambler, played by Donal Logue, says during the interview.

Only viewers who have been following everything in the Cloververse will notice the close ties in the Cloververse depicted in the film, but no obvious information is revealed (except at the end of the movie). You will need to review the previous clues in earlier movies in addition to the new clues from the ARG of The Cloverfield Paradox to connect the puzzle. In my case, I didn’t have an idea of the previous clues before watching the new movie. In my defense, I only recently discovered the ARG and the Cloververse.

Now, what was an ARG again? “Alternate Reality Game” (ARG) is an interactive networked narrative that uses the real world as a platform and uses multiple platforms and formats of storytelling to deliver a story that may be influenced by the players’ ideas and actions. In this case, The Cloverfield creative team is using mostly Viral marketing platforms for this game, a method of marketing whereby fans are encouraged to share information about the Cloververse via the Internet.

Maybe calling it a game will be confusing for some people, let’s call it a “challenge”. The ARG has fake websites, fake accounts, and videos created by the Cloverfield creative team that gives out clues about the clever verse. Like the Slusho! Truck. This truck has a Twitter account where it announces where it’s going. Fans who follow it on Twitter knew where to find it. It’s basically like a challenge to get all the clues by following the fake websites, fake accounts so it’s not an actual video game like some people think. You can’t jump in and start at the beginning at any time you want because the clues are given in real-time. For example, you won’t find the Slusho! in the same place if you go look for it today. I know it’s basically difficult to follow all these clues but not impossible. Fortunately, there is a blog “Cloverfield Clues” that provides information about all the recent found clues.

Let’s get into these clues found in the  Cloverfield Paradox ARG and see what we missed:

It started with the website 04182028.com displaying distorted footage of Mark Stambler from the future being viewed in the present day. A Twitter account was identified as being owned by an individual who may be the present-day Mark Stambler. In his tweet, he says he is not the person in the video, and he claims that some people are after him. In the video, Stambler states that the C.E.I., Cloverfield Energy Initiative was a lie and it still is a lie.

CEI became a reality when the people who solved the Slusho! truck puzzle at the Comic-Con event in 2017 received packages before the movie was released. The packages contained a Slusho! bubblehead, a certificate of authenticity, a Japanese-language newspaper, and the same Tagruato energy pamphlet containing information on the Tagruato new Project “ The Cloverfield Initiative” or C.E.I. 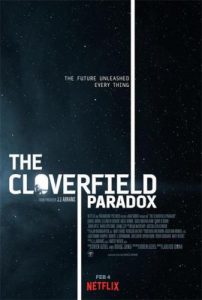 The fans that are monitoring the site claim that the Tagruato website crashed at one point, and has been displaying messages sent from the future. Based on the message from the video and the messages received from the crashed website, you can get an idea of what is happening to the earth in the movie.

The only issue is that to get an accurate idea; you need to carefully study the details for a while, even before the release of the movie, which I am not sure many people were aware of, I wasn’t aware. Another clue is that the Slusho! the truck has an exclusive Twitter account that features all the cities associated with Tagruato’s plans that they visited. This truck was at Comic-Con last year where you could win a package that contained merchandise about the Cloververse and additional information about the Cloververese that you won’t find anywhere else.

The most significant clue was provided at the beginning of the film, during the interview, and it explains why we are receiving messages from the future in the present. And don’t forget that Tagruato is an important protagonist in the Cloverfield universe and responsible for the collapse of earth and the human race. Tagruato is depicted the same way as the Umbrella Corporation in the Resident Evil stories.

The connections in the film have not been established in an obvious way or one could argue that for someone who doesn’t know about the ARG they are basically nonexistent. On the other hand, viewers who are able to make the right connections are able to come up with many possible theories surrounding the Cloververse.

After reading this information, I had a better understanding of “The Cloverfield Paradox.” The information about the Cloververse and the related ARGs of the two previous films have been obtained from these websites Cloverfield Wikia, Cloverfield Clues, Tagruato Blogspot, and the YouTube channel InsideAMind

Overall finding the correct information is challenging but having knowledge is a powerful key to enjoy this Cloverfield universe. We have come to a place where the information outlets we rely on, are more focused on headlines that creates controversy than telling the story correctly. That is how I didn’t initially know about the ARGs until recently and I know many other people who also didn’t know about the universe including the ARGs.

Want to learn more about the Cloverfield Paradox theories? In our upcoming article, we will discuss the theories which the movies are based on such as time travel and parallel universes.

If you are interested in the movie, there is an honest Cloverfield Paradox film Review you can read.

I hope you found this helpful. Let me know your thoughts in the comment section below.

4 thoughts on “Looking into The Cloverfield Paradox [ARG]”