The Theories behind Cloverfield Paradox 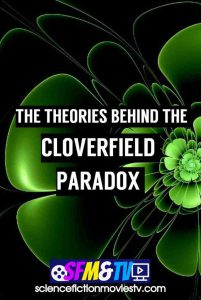 Cloverfield is an interesting franchise that tackles the unexplained like the present colliding with the future.

The unexplained is inspired by several theories like time travel, parallel universes, alternate dimensions, etc. If you are not familiar with the theories you would probably not understand what the movies are trying to tell.

These type of movies requires much though which not everyone is willing to try, which is why these kinds of movies don’t do well with critics apparently they have to give their verdict right after watching the movie and don’t have the time to research or give it some thought and let it sink in. I would prefer that to be honest but in today’s world governed by social media, it is like a competition in which critics will post their verdict first.

With Cloverfield Paradox, it was no different. Even though it is a standalone movie within the franchise, you will have to know the background story of the Cloververse. And of course, it would help to know about the theories of time travel and parallel universes on which the movies are based.

To give you a little background about the story of the completion of the film, the studios behind the project were not convinced of the final product and the release date was delayed several times. The film was first titled “God’s Particle”, then just “Cloverfield 3” and finally it got the title we know today “The Cloverfield Paradox.”

Hi Cristina, Thanks for taking some time to answer these questions.

Cristina: Nice to meet you and I will try to answer your questions as simply as possible.

First off, I am very curious about the first title of the film that they didn’t use. I know there is a theory behind that title. Why do you think would they consider that title? What is a God’s Particle?

Cristina: First of all answering your question, the film was based on a script from “Oren Uzie”l called “The God Particle”. What is a “God Particle”? It is just a particle that gives mass to the matter and it is scientifically called the Higgs boson. More scientific details for those who want to know will find on my site, in my article named “The God Particle Explained Simply.”  They first considered that title because the story follows a group of astronauts who travel to a parallel universe using a particle accelerator.

Based on what is means was it a good idea to change The God’s Particle to the Cloverfield Paradox?

Cristina: Asking me based on what was a good idea to change the title I will just tell you my point of view, Dira. In my opinion, I think it comes down to a matter of advertising and promotion. Although ‘The God Particle’ would have been an ideal name for the movie, you have to remember that it would be something new to the public. Fans of the initial Cloverfield movies, for example, would immediately be drawn to the latest addition, simply because it carries the name. The movie will sell simply because of the name on the poster. For me, that decision would have been made to attract an audience that was already there and waiting.

In a few scenes, there are some items displaced first I thought is it probably related to time travel and it is probably an explanation based on the interview we see at the beginning of the film. The particle accelerator could cause a problem through time displacing monsters in different timelines which eventually it does. Does this make sense to you?

Cristina: About displacing monsters from other worlds I don’t think so necessarily but displacing alien creatures (humanoids) is possible. You know, all these are theories, not facts yet.

Could you tell us more about the theory behind parallel universes?

Cristina: The theory behind parallel universes. .. A very complex question Dira. Now, telling you my personal opinion, I think it is possible but not with the collider for now. It is possible to have through natural portals, on our earth, doors to other worlds. When the “Big Bang” happened, it didn’t only form only our universe. 13 billion years ago everything changed because of the huge explosion. Small particles began to form larger pieces of matter. These are what we know today as stars, galaxies, and planets. So like this …millions of other worlds are formed. As we said somewhere there must be another Earth, a small piece from the original whole identical to ours.

A group of Australian and U.S. researchers, actually a team from Griffiths University, claimed that these worlds do exist and they interact with each other and they influence one another by a subtle force of repulsion.  A new theory claims that multiple and parallel universes exist and more than this, they interact with ours. Of course, the idea is that they interact at the quantum level and scientists sustain that this is detectable. A theory is that all the alternatives of present or past are real and they create different realities. Do you think this could be true?
But for more specific details about parallel universes, you can check my site, Your time travel experience, and even email me your questions.

Are parallel universes and alternate dimensions the same thing?

Cristina: This is a very good question Dira if parallel universes are the same thing as alternate dimensions. No, they are not the same, there is a difference. A parallel universe is a separate universe, containing same facts and even same characters. There is another you up there in a parallel Universe. An alternate universe or alternate dimension is a world in the same Universe but with altered facts, with different characters and events.

Are there actual studies performed on the existence of parallel universes?

Cristina: There are various studies about the existence of parallel universes in astrophysics, physics quantum mechanics, quantum physics and other domains. You have scientists like Prof. Howard Wiseman, Dr. Michael Hall, astrophysicist Ethan Siegal and many others who study this subject. The Uk’s Royal Astronomical Society published an evidence proving the Parallel Universes Theory. They published actually a study on the ‘cold spot’ which is a cold part of the space seen in the radiation that was produced billions of years ago when the universe was formed. There are many more theories about this subject but is a very in debt concept to discuss for now. Feel free to email me if you wish to continue to discuss the many theories and studies about parallel universes.

We already have an idea of the consequences of messing up with “the God’s Particle” based on the interview we saw at the beginning of the movie.  Were the consequences mentioned ever discussed in the scientific community or are they just fiction?

Cristina: Nice question. Do you know Dira Did you ever noticed that Sci-Fi films are so close to reality? Did you ever think for example how Close are the Terminator films to a possible future reality where robots take over the world? So yes, scientists know the consequences, this is why time travel will not be available to the public soon. Like many people who claim they are time travelers, time travel will be public in 2028. Do you believe it?

So a particle accelerator will create a huge amount of energy, this is why a black hole is possible to open. About the monsters, if you have seen “Stranger Things” we have the same thing, parallel world, and monsters, if the doors open and creatures from other universes come…everything is possible.

I’m a bit strong-minded and curious which led me to do some research about Cloverfield after watching Paradox and ignoring what the herd was saying: that it is a bad movie, don’t watch it, etc, etc. I was thinking: What was this? There must be more, what I’m I missing?

It is really hard not to comment and give away what is happening in the film. At least knowing a bit more will help you understand it a bit better. To be honest I still have questions but I think that’s the beauty of it. Cloverfield is complex and interesting if you give it time to let all the additional information through the Cloververse to sink in. I don’t know about you but I have learned a lot so far.

I would like to thank Cristina for her collaboration on this article and I invite you to visit her site about time travel theories and more.

Hope this was an interesting journey for you as it was for me. Many thanks for visiting this page. Feel free to leave your thoughts and feedback in the comment section below.

4 thoughts on “The Theories behind Cloverfield Paradox”