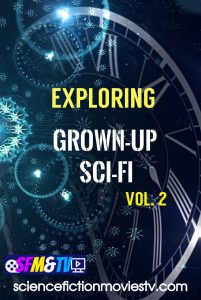 A while ago we were looking into Grown-Up Sci-Fi. What was that again? Simply stated it is science fiction that covers serious topics.  It is differentiated from the traditional Space Opera and Superhero stories which focused more on good versus evil.

Grown-up Sci-Fi has become a style of filmmaking that even those creators accustomed o the traditional style tried to change from a black-and-white space into a more grey area of storytelling with complex characters that are neither angels nor devils but are rather something in between.

It was and continues to be a challenge. Some creators succeeded, and others didn’t. In the first volume of the series, we discussed ten grown-up Sci-Fi films. Now in volume 2, we will continue the exploration of more titles.

I’m happy to continue this journey with Primer a 2004 American independent science fiction film about the accidental discovery of time travel that changes the life of Aaron, played by Shane Carruth, and Abe, played by David Sullivan. The rest of the cast are either friends or family members of Carruth. Carruth directed, produced, wrote, and starred in the film. He also worked on the score and edited the film.

The film intended to show the accidental discovery as realistically as possible. For example, filming the scenes of the discovery in locations that are neither eccentric nor glamorous. The central theme of the film is the relationship between Abe and Aaron and how it changes as a result of their inability to cope with the power they gained from the discovery.

The principles of time travel in the story are inspired by Richard Feynman’s Diagrams and Carruth studied physics to make the technical dialogue sound authentic. The time machine itself is a plain gray box, the sounds are originated from existing machines rather than created digitally. The story is set in unglamorous industrial parks and suburban tract homes.

The film’s budget was only $7,000 and distributed in the U.S. by THINKfilm. Carruth made specific demands to the distributor in order to retain control over the film. This distribution was possible because the film collected the Grand Jury Prize and the Alfred. P. Sloan Prize at the 2004 Sundance Film Festival. In addition, the film also won the Best Writer/Director award at the Nantucket Film Festival in 2004 and the Best Feature award at the 2005 London International Festival of Science Fiction. This small film managed to collect more than 400 thousand dollars at the box office.

This is a great example of how a small film can make it big. The creator didn’t change the material and defended his vision which was a good decision in the end. Can you imagine if this was a studio film what they would have done with it? Platforms like Kickstarter and Netflix are continuously supporting independent filmmaking and I hope more and more people see these movies, documentaries, or TV series and support these creators. Most of them have a clear vision of what they want and know what they are doing.

Children of Men is a British-American film based on P.D. James 1992 novel of the same name. The story takes place in a dystopian future where human infertility has left society collapsing. Only the United Kingdom has a functioning government that imposes oppressive immigration laws on refugees.  If you are a regular visitor on this site, this film may sound familiar to you. We have discussed it in the previous post 4 easy ways to introduce Sci-Fi to your friends Part 3. For those of you who don’t know about this film, let’s dive right into it.

Theo Faron, played by Clive Owen, must help a refugee named Kee, played by Clare-Hope Ashithey. The film explores themes of hope, faith, religion, and immigration. The concept of female fertility is used as a metaphor for the fading sense of hope. Further, the use of Christian symbolism is noted in the film. Many called the film a modern-day nativity story. Moreover, the film stands out because of its unconventional approach of using a documentary style for a modern action film.

The film makes a potent case against anti-immigration, a theme that twelve years later is still relevant. In the film, refugees are hunted down, put into cages and camps and in some cases even murdered. It is symbolically a reminder of the Holocaust, an event many wish to forget. Unfortunately, it seems like we are as a society going backwards to the same ideologies that started that event, not being able to accept, understand and respect groups that are different.

You would expect this behavior from the less educated but even the high society educated people are behaving this way. It is a reflection of how backwards education and human values have gone. You wouldn’t expect students from MIT, Yale, and Harvard to constantly take drugs and drink a lot. Those actions have consequences for the human brain not to mention the reason behind those actions. Parents are putting pressure on the students to obtain good grades, society puts pressure on the students to look a certain way to be cool, and they have communication problems with their parents. In the end, it will not matter that you have a degree in whatever, your brain doesn’t work the way it should.  It seems like there are many of these kinds of people in important positions that are taking stupid decisions.

If you think the situation in the film is too dramatic let me mention the unfortunate situation that the Rohingya people are facing. They are stateless Indo-Aryan-speaking people who reside in Rakhine State, Myanmar. Described by the United Nations in 2013 as one of the most persecuted minorities in the world, the Rohingya population is denied citizenship under the 1982 Myanmar nationality law. According to Human Rights Watch, the 1982 law effectively denies the possibility of acquiring a nationality”. Myanmar law does not recognize the ethnic minority as one of the eight “national indigenous races” despite being able to trace Rohingya history to the 8th-century history of Myanmar. They are also restricted from freedom of movement, state education, and civil service jobs.  The legal conditions faced by the Rohingya in Myanmar have been widely compared to apartheid. Before the 2016-2017 crisis, there were approximately one million Rohingya living in Myanmar. In 2017 more than 600,000 have crossed the border into Bangladesh. If it were you wouldn’t you want to look for a better life somewhere else? Now, what was the crisis about? This situation was not widely covered by the popular news media outlets when it happened. You can look for the videos. It was the independent media that reported the most about this issue.

The Rohingya persecution in Myanmar occurred in late 2016 when Myanmar’s armed forces and police started a major crackdown on Rohingya people in Rakhine State. The crackdown was in response to attacks on Burmese border posts in October 2016 by unidentified insurgents. The Burmese military has been accused of ethnic cleansing and genocide by various United Nations agencies, International Criminal Court officials, human rights groups, journalists, and governments. The United Nations has found evidence of wide-scale human rights violations, including extrajudicial killings, gang rapes, arson, and infanticides, which the Burmese government dismisses as “exaggerations”.

If you compare how long it took to make a decision to bomb Syria or and long it is taking to send concrete help to these people. Simply because these people don’t have anything to offer, Syria, on the other hand, has natural resources that many governments wish to put their hands on. Why is this still happening in the 21st century?

Talking about Syria I can’t fail to mention the situation of the Syrian Refugees, victims of a war none of the working people of Syria asked for. It is sad that those responsible are not taking any action in helping those refugees especially the allies that supporting the war. You created a situation where people lost their homes and their jobs. The refugees include people for the low and middle class of Syria, There are lawyers, accountants, and other skilled people living the life of refugees with their families.

My apologies for the rant but I believe these are topics that need to be discussed more. Now back to the film, it premiered on September 3, 2006, at the 63rd Venice International Film Festival. The film was released on September 22, 2006, in the United Kingdom and on December 25 in the United States with limited releases. The film received critical acclaim and was nominated for the Academy Awards, BAFTA Awards, and Saturn Awards.  Children of Men is a film I strongly recommend for its relevance. It can be used as a topic to start a healthy discussion about immigration.

Sunshine is a 2007 British American Science Fiction Thriller that is the complete opposite of Primer (2004) in terms of how it was made. Primer presented the science and the relationship between the main characters in a realistic way. Sunshine deals with science and psychology in a different way. While it excels on the psychological part, the science is inaccurate. One would argue that it would never be realistic if the films take place in the future and therefore one can think of several reasons to explain the inaccuracies.  The story is a reflection of the arrogance of science and takes place 50 years in the future. The film is inspired by sci-fi classics such as 2001: A Space Odyssey (1968), Solaris (1972), and Alien (1979).

Now, what’s the film about? In 2057 the sun is dying and the earth is freezing. A crew is sent aboard the spaceship Icarus II with a nuclear bomb aboard with the mission to revive the sun and return to the earth. However, the mission didn’t go as planned and now the crew has to face some difficulties in order to complete the mission. The crew is played by an international cast featuring Cillian Murphy, Chris Evans, Rose Byrne, Michelle Yeoh, Cliff Curtis, Troy Garity, Benedict Wong, Hyroyuki Sanada, and Chipo Chung.

The film premiered on March 23, 2007, at the Fantasy Filmfest in Bochum, Germany. A few months later it was released in the U.K on April 6 and in the U.S on July 20. The film received both positive and negative reviews and won the award for Best Technical Achievement at the 2007 British Independent Film Awards. The film is a visual spectacle that tackles themes of philosophy, psychology, humanity, religion and science fiction. To be honest I didn’t care much about the accurate science. To me it was just a story told through film.

There you have it another journey through science fiction. The beauty of these films is that they leave you thinking and analyzing sensitive themes that you normally wouldn’t bring up in a conversation but is still important to discuss and share opinions.

What about you? Have you seen any of these movies already? What do you remember from watching these movies? Feel free to leave your thoughts and comments in the comment section below.