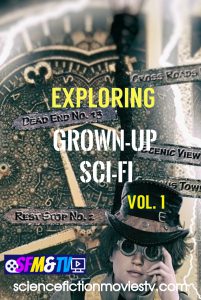 Continuing the discussion about Grown-Up Sci-Fi, we have to admit that there is a lot to explore. We started with what we considered as “Classic Grown-Up Sci-Fi Films and we looked into the “Classic Universal Monsters”.

All these films were very popular properties that the common movie watcher watched or at least heard about but what about less-known titles?

In this series, we will focus on those Sci-Fi Films from the eighties, nineties, and early 2000s that weren’t as popular with the audience or critics but gained a cult following as the years go by.

Let’s start with a very unusual story. An alien spacecraft about the size of a dinner plate, with invisible aliens, came to Earth looking for heroin. They land on top of a New York apartment of a drug dealer, Adrian, and her female lover, Margaret, an androgynous, bisexual nymphomaniac fashion model live. Margaret has sex with many partners asking for cocaine in return. She has been consistently abused by people in the fashion industry and her own drug-using subculture. One day she realizes that something is killing everyone who had sex with her. She used this to her advantage for revenge against those who treated her badly.

The film was very well received by critics and became the most successful independent film in 1982. The film was first released at the Montreal Film Festival in August 182 and in the U.S. it was released in April 1983. The film is a strange combination of science fiction, black satire humor, and punk rock that portrayed the bohemian new wave subculture of New York City during the early 1980s. A standout of this film is the actress Anne Carlisle who played two roles in the movie, Margaret, and Jimmy, Margaret’s arrogant gay rival/nemesis. In truth, the film is somewhat depressing and genuinely strange. For those that are interested in its cinematography, the filmmakers used cutting-edge music, fashion, and visuals that make it fashionably retro.

The film is about how five medical students experiment with “near-death” experiences until the dark consequences of past tragedies begin to jeopardize their lives. They begin having flashes of walking nightmares from their childhood, reflecting sins they committed or had committed against them.  This Sci-Fi psychological horror film was a financial success but didn’t do well with the critics. Nevertheless, the film was nominated for an Academy Award for Best Sound Editing. A remake was released on September 29, 2017, but was not as well-received by the audience and critics.

This Sci-Fi cyberpunk action film takes place in 2027 where Japan and America have merged politically and economically. It tells the story of Alex, a burned-out LAPD cop, who is a part man-part machine, is being forced by commissioner Farnsworth to come back to the force, t find his former partner who has stolen some important data that is assumed will be delivered to information terrorists that threaten to destroy order in society.

The film did somewhat well with the audience, however, it is very difficult to explain when reviewing the financial results how it manages to have four sequels afterward: Nemesis 2: Nebula, Nemesis 3: Prey Harder, Nemesis 4: Death Angel. Some of the sequels even used footage of the previous installments. Nemesis 5: The New Model was supposed to be in production in late 2017.  The 1998 released DVDs were for a long time out of production. A few years later the film was re-released with a new alternate ending with better visual effects. This extended version was only released in Japan and Germany. In 2014, the complete set of Nemesis film series was released in HD and in 2015 it was released on Region 2 and Region B Blue Ray DVDs. Over the years, the film became more popular as more people are watching it.

What would you do if you could be sent back in time? In 2035, the world is devastated by disease caused by a deadly virus that was released in 1996. The virus wiped out almost all of humankind, forcing survivors to live underground. A convict, James Cole, is selected to be trained and sent back in time to find the original virus in order to help scientists develop a cure. In the meantime, Cole is experiencing recurring weird dreams. The story explores the Mandella Effect and Time Travel.

This neo-noir Sci-Fi story was inspired by the French short film “La Jetée (1962) and received critical acclaim and did exceptionally well at the box office. The film received nominations for the Academy Awards for Best Supporting Actor and won the nomination. the film is still a favorite among many fans who wished to see more of this story. That wish came true in April 2014 when the first season of the TV series with the same name aired and was well viewed. The fourth and final season is expected to air somewhere in 2018.

Based on Carl Sagan’s 1985 novel of the same name, the film tells the story of how Dr. Ellie Arroway, who works for the SETI program, finds radio proof of extraterrestrial intelligence from the star system Vega, 26 light-years away. After decoding the signal she found schematics for a machine that appears to be some kind of transport for a single being.

The film was a financial success but did not land as good with the critics. Science and religion are very strong themes in the movie but these believe it or not were the main focus of discussion after the film released. Instead, various scandals on the use of Bill Clinton’s image and speech in the movie, the use of CNN personalities, the use of the Cyanide Pill by NASA, and several lawsuits were covering the headlines. Nonetheless, the film is remembered by many Sci-Fi fans today, especially for the visuals.

The story takes place in a future society driven by eugenics, a set of beliefs and practices that aims at improving human genetics where children are conceived in the eugenics program through genetic manipulation to ensure they have the best hereditary traits of their parents. Those who are conceived outside the eugenics program suffer genetic discrimination and are looked at as inferior. A genetically inferior man assumes the identity of a superior one in order to realize his dream of traveling into space.

The film did not well at the box office but received positive reviews from critics. Despite not being successful at the box office the film was revisited by many movie watchers and managed to gain a cult following over the years. The film was nominated for the Academy Award for Best Art Direction.

John Murdoch awakens in a hotel’s bathtub suffering from amnesia in a city where it is always nighttime. He became the main suspect in a series of murders he didn’t commit and learned that he is married to Emma. While trying to piece together his past he comes across an underworld controlled by a group of beings known as “ The Strangers” who possess the ability to put people to sleep and alter the city and the lives of all the people living in it.

This neo-noir Sci-Fi film received positive reviews from critics but didn’t land well with the audience. A possible explanation is that the studio made some changes because they were afraid that the audience would not understand the film. Despite that, the film received many award nominations and won several of them. In 2008 a director’s cut was released, restoring and preserving the original artistic vision of the director. The film is stylistically inspired by Metropolis, Nosferatu, Brazil, City of Angels and Akira. In a curious note, the popular film “The Matrix” was released one year after Dark City using the same sets. Many noticed the similarities in the story, the cinematography, and the atmosphere.

The film follows the story of Donnie, a troubled teenager and bright high school student with a dark eccentric side. Donnie is visited on occasion by Frank, a man dressed in a large rabbit suit, that only Donnie can see, who often urges him to perform dangerous and destructive pranks. The film didn’t perform as expected at the box office but did receive critical acclaim. Over the years the film gained a cult following and gained more than its box office results through home video sales and the film’s soundtrack sales.

A director’s cut was released in 2004. The cut includes twenty minutes of extra footage and an altered soundtrack. A sequel, S. Darko was released in 2009. Richard Kelly, the director and one of the producers of Donnie Darko, said he had no involvement in the sequel since he didn’t own the rights to the original film. The sequel received extremely negative reviews from both the critics and the audience. In an interview published on  January 24, 2017, <link to interview> Kelly revealed he wants to do something within the Donnie Darko inverse but he wants to get the necessary resources in order to make after he finishes his next film.

If you have the chance to go back in time and change your story, would you do it? John Sullivan would do anything to save his father Frank, a heroic firefighter, who died in a fire on October 12, 1969. An accidental cross-time radio link connects father and son across 30 years of time.  John tries to save his father’s life, however changing history comes with a price and he will have to face the consequences.

This science-fiction thriller drama received mostly positive reviews. The story is about the relationship between father and son and the mystery of time travel. The film stars Dennis Quaid (remember him? as Frank Sullivan. It was reported in 2014 that NBC was planning to produce a new TV series based on the film. Later NBC passed it on and CW ordered the pilot in 2016. After 13 episodes the show was canceled in 2017.

Solaris….the title sound familiar, right? That’s because we have discussed this title before in “Interesting Foreign Films” and “Grown-up Sci-Fi Classics”, actually we discussed the 1978 version. This 2002 version is another interpretation of Solaris. The story is more based on the drama surrounding the relationship and feelings the main protagonists have.

The film did not do well with critics or the audience but if you have seen the 1978 version already you can check out this version out of curiosity and make a comparison for yourself. Watching films is a different experience for everyone. Don’t rely so much on what the majority thinks. You have the right to have your own opinion. If you like dramas this is something for you to see. If not, it’s completely ok to see something else. The Sci-Fi film genre has grown so much that today there is something for everyone to see.

These first ten movies look interesting, right? And they are Sci-Fi movies that probably many people forgot about or haven’t seen yet. The new generation has probably never heard of these titles. What about you? Have you seen any of these movies already? What do you remember from watching these movies? Feel free to leave your thoughts in the comment section below.