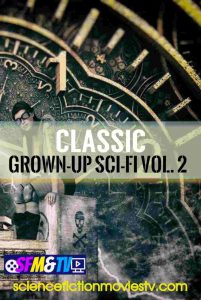 Continuing the exploration of classic grown-up science fiction films, this edition has very interesting titles that will be very familiar to Sci-Fi fans. The stories are brought to the big screen in an artistic way that captures the interest of movie watchers.

Today they are a legacy from which new filmmakers are learning, at least I hope they do.

There is so much complexity in the stories and the way they made the cinematography, that it is worthwhile learning how they managed to make great pieces of Sci-Fi without having the CGI technology we have today, a technology that annoyingly seems to be the answer to everything these days. Let’s start the journey….

The film is based on Michael Crichton’s 1969 novel of the same name and directed by Robert Wise. Name sound familiar? Well, yes he directed the film “The Day the Earth Stood Still” we previously discussed.

The film received mixed reviews. Some praised the visual effects since it was one of the first films to use advanced computerized photographic visual effects, others didn’t like the changes in this adaptation. Overall it is an interesting film to revisit or see for the first time today. An adaptation in the form of a  TV mini-series was created in 2008 based on the novel.

Solaris: seems like a familiar title right? That’s because we have previously mentioned this film in the series of “Foreign Interesting Sci-Fi Films”. Solaris is a meditative psychological drama occurring mostly aboard a space station orbiting the fictional planet Solaris, directed by Andrei Tarkovsky. The film premiered in the Mir film theater in Moscow on February 5, 1973. Solaris was screened in the USSR in Limited runs for 15 years without any breaks, giving it a solid cult status.

An adaptation of Solaris was created in 2002 directed by Steven Soderberg. As usual, the adaptation was not well received and one of the reasons is the different take of the story. Some people felt this adaptation was more a soap opera than a psychological drama. The film was selected for screening at the 2016 Cannes Film Festival as part of the Cannes Classics Collection. Today the film remains a favorite and is a Sci-Fi classic which should be watched.

In a small unnamed country, there is an area called “The Zone.” The Zone is where apparently aliens live. It is believed that there is a room that grants wishes. The government has declared that no one is allowed to go in that area but that didn’t stop people from attempting to enter “The Zone.” A figure known as the “Stalker” will take his two clients, a writer who seeks inspiration, and a professor, who seeks scientific discovery, to “The Zone.”

The film is directed by Andrei Tarkovsky. After his great work with “Solaris”, it is very impressive how he managed to direct yet another great film. The film combines elements of science fiction with dramatic philosophical and psychological themes. Stalker has been called one of the best drama films of the 20th century and still holds its status of classic Sci-Fi today.

Based on Karl Alexander’s 1st novel of the same name, the film tells the adventure of H.G. Wells and his time machine. H.G Wells who lives in London has just invented the time machine but hasn’t tested it out yet. Wells discovers that one of his friends, John Leslie Stevenson, is actually Jack the Ripper when the police are pursuing him during a gathering at his home where he wanted to discuss his new invention, the time machine. Stevenson uses the time machine to escape.

Wells follows Stevenson into the late 1970s California, United States, where he meets Amy, a bank clerk, who teaches him about life in the 1970s. He is disappointed to find out that the future is not the Utopia as he had predicted. As Wells and Amy search for Stevenson, he is after Wells to take the master key of the time machine and is enjoying the more violent society in which he continuously murdering people.

The film was directed by George Pal who was also a producer of The War of Worlds (1953) we previously discussed and was fortunately well received by critics. The story shows both the possibilities and limitations of taking liberties with literature and history. The story about the time-traveling adventures of the inventor of the time machine is just classic Sci-Fi.

The film is based on the 1968 novel “Do Androids Dream of Electric Sheep?” by Philip K. Dirk. The film is set in a dystopian future in which synthetic humans known as replicants are created by the powerful Tyrell Corporation. The replicants are being sent to work on off-world colonies. One day a group of replicants escapes, and a cop, Rick Deckard, is sent to find them. He meets a female replicant, Rachael, who causes him to question his work.

The film received mixed reviews, of which the negative ones resonated stronger. Some like the visual effects while most of the others didn’t like the story. And it did not do well at the box office either. Years later it became a critically acclaimed cult film and is now regarded as one of the best science fiction films.  the film has been highly influential in many Sci-Fi films, TV shows, anime, and video games, like Dues-Ex. The film’s neo-noir style and futuristic designs have served as a benchmark in the Sci-Fi genre.

Several versions of the same film have been made over the years based on studio executive requests. However the most popular and better is the final cut, a 25th anniversary digitally remastered version, released in 2007, the version where the director had complete artistic control. In 1993, it was selected for preservation in the United States National Film Registry by the Library of Congress as “culturally, historically and aesthetically significant” and is frequently used as an example to taught in university courses.

In 2007, it was named the second most visually influential film of all time by the Visual Effect Society. The film continues to reflect modern trends and concerns and has been very influential to the cyberpunk and biopunk movements.

K.W. Jeter wrote three authorized Blade Runner novels that continue Rick Deckard’s story, “Blade Runner 2: The Edge of Human” (1995), “Blade Runner 3: Replicant Night” (1996), and “Blade Runner 4: Eye and Talon” (2000). For Blade Runner and Alien Fanatics, there is a possible connection between the Blade Runner universe and the Alien universe as, a bonus feature on the DVD of the film “Prometheus”, states that Eldon Tyrell, CEO of the Blade Runner Tyrell Corporation was the mentor of Peter Weyland. The sequel to the film titled “Blade Runner 2049” was released on October 6, 2017, which was well-received but this version still remains the first choice for many Sci-Fi fans.

Brazil: where have you read this title before? That’s because we have previously mentioned this film in the series of “Unusual Movies to Watch around Christmas Holidays”. The story plays out in a consumer-driven dystopian industrial world in which there is an over-reliance on poorly maintained machines and has a totalitarian government in power. Sam Lowry, a man trying to find a woman who appears in his dreams while he is working an unsatisfactory job and living in a small apartment.

The film was a commercial success in Europe but did not do well in the U.S. Even though it was not a commercial success, the film was well-received by critics and nominated for the Academy Awards for original screenplay and best art direction. Over the years the film’s cinematography has inspired other filmmakers and it has also been recognized as an inspiration for writers and artists of the steampunk subculture.

I probably shouldn’t have to ask but have you seen any of these films already?

Because I have a feeling most of you did 🙂

If you haven’t seen any of them yet, would you consider watching one of them?

Even though we have come a little forward in time finishing with 80s movies in this edition, we know there are still some classics out there to explore from the 30s, 40s, 50s, and 60s. and of course, we will also explore the classic universal monsters in these series of Classic Sci-Fi so feel free to visit us again to continue this journey 🙂

We appreciate your interest in classic Sci-Fi and would love to hear from you. Helps us shine the light on movies that were great but are probably forgotten or never heard of by the new generation. Is there a classic you consider should be included in this series of Classic Grown-up Sci-Fi which we haven’t discussed yet? Feel free to leave your comments.