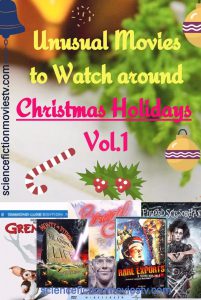 What easier way to spend time with friends and family by watching movies. Even though the traditional Christmas Hallmark & Lifetime movies are great, there are movies some would call unconventional to watch during the holiday but at the same time, they seem like the perfect choice. There are very interesting stories that at first glance don’t seem to fit the holiday but once the story is told it seems to fit perfectly.

This time we will mostly look into movies that somehow fall in the genre of Fantasy and Science Fiction with the exception of our first mention, which is one film that may look like a fantasy to some people because of it’s surreal themes. Even though it doesn’t technically fall into that genre it deserves to be mentioned. So let’s start with a few interesting titles:

This is a British Musical Sketch Comedy something most people are not used to. The film includes many surreal sketches that tell a story from different perspectives. The main actors are the members of Monty Python, also known as “the Pythons”, which were a surreal comedy group that made their own sketch comedy show. They were very popular in the eighties in England and their influence on comedy is often compared to the influence of the Beatles on music.

Back to the movie, there are many bizarre scenes that may leave some people uncomfortable.  It is definitely a very unusual film but if you stick till the end the final message, which is what the sketches were building up, is very relevant for today even though it’s a movie from the 1980s.

I normally try my best not to give any spoilers but since this seems like a strange film at first and people may turn away  I want people to check it out and spread its message given at the end of the film <spoiler ahead>: “ At the end of the film they show an envelope containing the meaning of life which is as follows: “Try and be nice to people, avoid eating fat, read a good book every now and then, get some walking in, and try and live together in peace and harmony with people of all creeds and nations.” This is an eighties movie and the message still resonates today as something to strive for. We still have a lot of work to do.

Randall Peltzer visits an antique store in Chinatown antique store and somehow manages to obtain a small furry creature called a Mogwai (which means monster in Cantonese). He gives it to his son as a pet. There are 3 specific rules to follow in order to take care of this pet. Billy breaks all of them unleashing a series of unfortunate events during the Christmas holiday.

Even though this is a fantasy horror comedy film, it also gives great lessons on taking responsibility for your actions. Blaming others is not the solution to the problem. Billy should have been more careful but his father should have also listened to the owner of the antique store and leave the Mogwai there. Maybe this was what Billy needed the experience to become more mature.

It gives the lesson to be prepared and research whatever circumstances you are getting into. The right information is key to making the best decisions. Maybe if Randall knew the meaning of the pet’s name he wouldn’t have bought it. We will never know but we discuss it. It is the perfect comedy horror movie for the family (It has some scares but it is not an “It” movie, so don’t worry and the comedy in it is a good distraction from scares).

This is a sci-fi cyberpunk fantasy movie. The story takes place during the Christmas holidays but it is not a typical Christmas movie. The movie tells the story of Sam, who works as a low-level government employee. He has dreams to be a knight in shining armor saving a woman. It all goes wrong when he literally meets the woman of his dreams in real life. Further on there is a constant battle between fantasy and reality in the story.

Same as the “Meaning of Life” many of the themes in this movie are still relevant today like consumerist behavior and materialistic society, and the necessity to find scapegoats no matters the costs. The last one mentioned can be seen in the movie when a wrongful raid was performed after the bombing of an electronic store into the Buttle home when it should have been Tuttle. Mr. Buttle was arrested and his house was seriously damaged. There are series of terrorist attacks but the chaos is hidden from the consumers.

In addition, the theme of the ideal (unrealistic) body image that is promoted by the media is present in the high society women that spend hours and hours adjusting their bodies than trying to connect their nonexistent relationships.

The film also digs into the increased value of credentials over competency indicating that credentials can be bought and having only credentials doesn’t mean you are right for the job. The most important theme and main message of the film is the one of having and conserving meaningful relationships. Despite all odds, Sam is constantly chasing his dream of having something of real value.

Christmas is about the people in our life and our relationship with them. We should cherish that and not worry so much about materialistic things. It is the perfect movie to see with the family.

This is one of my favorite sci-fi and fantasy movies to watch in December or any other day during the year. You may have read about this movie in older posts. For those who don’t know, what the movie is about, let’s get right into it. A curious beautician finds a very unusual boy in a very old mansion. She doesn’t want him to live in isolation and decides to take him to her home.

Because the boy is different many people are afraid of him. Despite many setbacks, the beautician helps him to start discovering ways to integrate into the community. There are so many beautiful themes in this movie like helping each other without expecting anything, the value of companionship, the true meaning of family (bonds that are made without having a blood relation). It is the perfect movie to watch with the family this Christmas.

What is so unusual about this Finnish dark fantasy horror and thriller film you may ask? Well, it’s not your typical Santa Claus story so don’t expect a happy go lucky movie. Now, what is this movie about?

In Finland in the depths of the Kowatunturi Mountains lies the secret of Christmas. According to the books, children read the story, he was a horned being who whips misbehaving children, nothing close to the traditional child-friendly image of Santa. The story starts to get interesting when a British research team travels to the top of the Kowatunturi to examine drilling specimens. During the journey, they encounter a dark powerful beast. The fury of this being is unleashed when most of the team starts behaving badly.

It is an interesting story to look into because of its unique angle. The story is giving you a mirror to look at your own behavior, many times we don’t realize we’re being rude or are unleashing anger and frustration on someone else.

In the movie, wrong behavior has dangerous consequences. In real life, we don’t really acknowledge it, but the receiving end will not forget it and that may have some long-lasting negative impacts on the relations. Especially during this last decade, the decade of social media, it has become so easy to vent out frustrations most of the times by being rude and offend people without any consequence. Even though it is not your happy Santa Claus story, it is an interesting story to discuss with family and friends.

We are at the end of the first edition of this series of unusual films to watch during Christmas. We discussed five interesting unusual movies for you to consider watching during the Holidays. Now let’s hear from you.

Have you seen any of the above-mentioned already? If you have not seen any of the above-mentioned films, will you consider watching (one) them? If yes, which one would you watch? Are there any other unusual movies you have watched during Christmas Holidays that had a certain message or theme of important value for you?  Feel free to leave your comments.

2 thoughts on “Unusual Movies to Watch around Christmas Holidays Vol.1”