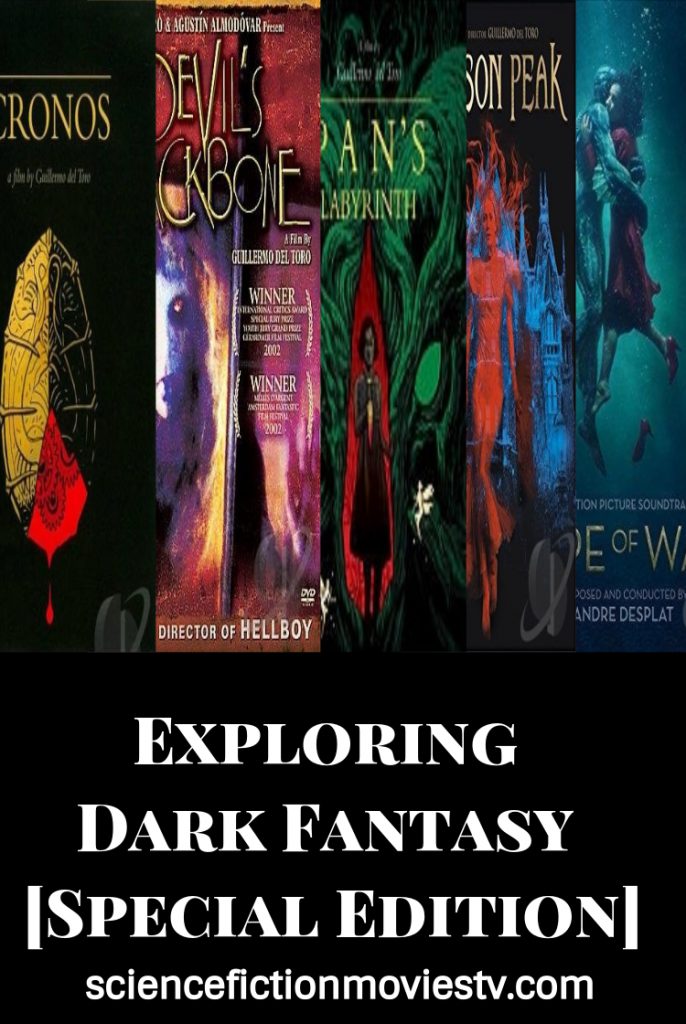 The particularity of this genre is that it incorporates darker and more frightening themes of fantasy. But before starting officially with the series, we will first have this special edition dedicated to the best work of Guillermo del Toro (in my opinion).

It is difficult to talk about Dark Fantasy without mentioning Guillermo del Toro as a filmmaker (writer and director). Especially after his big win at the Oscars this year for the nomination of Best Director for his film “The Shape of Water”.

Okay, maybe I’m a little biased because I am a fan of his work.  He tells his stories with Dark Fantasy and Gothic elements which are based on his life experiences. His movies show an interesting style of filmmaking. What better way to start this series of Dark Fantasy Films than with some of his most interesting films?

If you are interested in the concept of alchemy and the supernatural this film will be a good watch for you.  It has a very particularly weird story that combines elements of alchemy and vampirism. What’s the story about?

A mysterious device designed to provide its owner with eternal life resurfaces after four hundred years, leaving a trail of destruction in its path. Starring Federico Luppi, Ron Perlman, Claudio Brook and Margarita Isabel, the film is a horror drama with strong mythology and religious references. For more specific details about the film visit our previous post “5 Interesting Foreign Sci-Fi Fantasy Film Vol.1.”

The Devil’s Backbone story takes place during the Spanish Civil War. After his father died in the Spanish Civil War Carlos is sent to an orphanage. Two Republicans bring him to the orphanage operated by Casares and Carmen. Casares and Carmen are aligned with the Republican loyalist and are hiding a large cache of gold that is used to back the Republican treasury. The orphanage has received attacks from Francisco Franco’s troops, and there is a diffused bomb in the home’s courtyard.

Soon after arriving at the orphanage Carlos starts having visions of a mysterious apparition and heard strange stories about a boy named Santi who went missing the day the bomb appeared near the orphanage.  Starring Marisa Paredes, Eduardo Noriega, Federico Luppi, and Fernando Tielve, this gothic horror story shows a portrait of childhood in a time of war. It is a ghost story that tries to show you the struggles in this case of children during the Spanish Civil War.

“Pan’s Labyrinth” or “El Laberinto del Fauno’, after ‘Cronos’ and ‘The Devil’s Backbone has been Del Toro’s most recognized work internationally for winning the Academy Awards for Best Art Direction, Best Cinematography, and Best Makeup. The film is a straightforward Dark fantasy that in a way continuous, after the Devil’s Backbone, to show the realities of the Spanish Civil War.

This time the story is told through a mythical world of strange creatures. What’s the story about? In the falangist Spain of 1944, the bookish young stepdaughter of a sadistic army officer, played by actress Ivana Baquero, escapes into an eerie but captivating fantasy world. For more details about the film visit our previous post “5 Interesting Foreign Sci-Fi and Fantasy Films Vol.2.”

Starring Mia Wasikowska, Jessica Chastain, and Tom Hiddleston the film tells the story of an aspiring author who in the aftermath of a family tragedy is torn between love for her childhood friend and the temptation of a mysterious outsider. Trying to escape the ghosts of her past, she is swept away to a house that breathes, bleeds, and remembers.

This time we are presented with a gothic romantic drama that is centered on relationships like family relationships, and romantic relationships and the dangers that come when those two kinds of relationships are mixed.  There is one metaphor in the story that represents all the ugly in one’s life and how not letting go of the past can haunt you in the present and prevent you to live your life your way.

After Pan’s Labyrinth, this will be probably Del Tor’s most recognized work for its success at the Oscars. The movie stands out for its unconventional love story between a mute woman, played by Sally Hawkins, and an amphibian man, played by Doug Jones. Her circle of friends includes Giles, a gay person, played by Richard Jenkins, and Zelda, a person of color who is her superior at work, played by Octavia Spencer. What’s the story about?

At a top-secret research facility in the 1960s, a lonely janitor forms a unique relationship with an amphibious creature that is being held in captivity.  This dark fantasy drama is not only about a love story but also about relationships with friends and family or people you consider family but are not blood-related. It shows the ugly side of what we consider perfection.

In the end, we see that there is nothing perfect, our “imperfections” are our strength. We all have something others don’t have, a talent, a birthmark, something that makes us different and stand out. That makes people envious and they will try to convince you to change and become the same as the rest. If you think about it they are not really imperfections. Just because it’s different it’s not perfect? There is nothing wrong with being different. Embrace who you are, that is your strength.

I hope you’ve enjoyed this special edition of Dark Fantasy where we discussed Guillermo del Toro’s work in this genre. If you are interested to check more of his work, he has an animated series on Netflix titled Trollhunters. It’s a Fantasy series that both kids and adults can enjoy.

There are plans to expand the universe of Trollhunters with two new animated shows. One will be a Sci-Fi show about Aliens and the other will be a Fantasy show about Wizards. This last one will be more interconnected uniting the worlds of Trolls, Aliens, and Wizards.