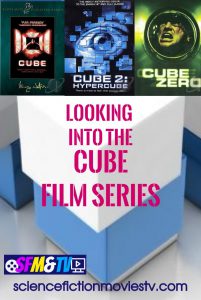 The Cube film series consists of three Canadian films directed by Vincenzo Natali, Andrzej Sekula, and Ernie Barbarash respectively. They are independent science fiction psychological thriller-horror films. It appears that the movies are loosely based on Jim Henson’s screenplay “The Cube” which, in turn, is loosely based on the short story “The Squirrel Cage” by Thomas M. Disch. The Twilight Zone TV series was also an inspiration for the movie. Remember the “Saw” films, “The Mist” and “The Maze Runner” franchise? Their stories in some way are very similar to the Cube series. It is possible that these filmmakers were inspired by the Cube film series? Most probably.

In the Cube series, each film has a similar setting: a gigantic mechanical operated cubical structure that consists of many smaller cubical rooms. Each room has six vault doors, which lead to other similar rooms. In each story, a group of strangers awakens in this mysterious cubical structure with no memory of how or why they are there. As they move forward in the structure they soon find out that each room has lethal booby traps. They are triggered by either sound or motion. As mentioned before these films are independent films which means they were made with a low budget. The first film “Cube” was released in 1997, the second film “Cube 2: Hypercube” was released in 2002, and the third film “Cube Zero” was released in 2004. 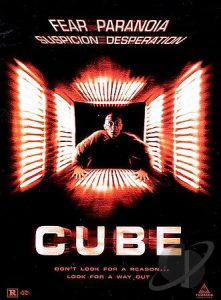 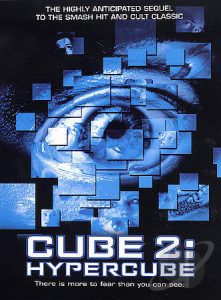 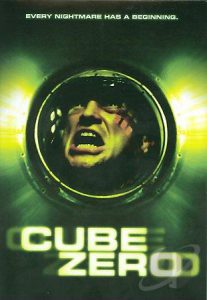 The Cube series is highly considered as a complex franchise which stories are based around a mysterious cube. The fun part is that the viewer is getting the same information as the characters on screen. There are some clues in the story but according to the filmmakers keeping aspects of the Cube ambiguous was intended and deliberate. In the end, this strategy worked because till today people are still discussing the theories around this film series.

Having said this, this series is not for everyone. The death scenes are gory, if you’re familiar with “Saw” franchise, you wouldn’t have a problem watching these films.  Same as the characters you don’t know what’s going to happen, you are as lost and confused as they are, you are left in suspense. Furthermore what these films do is leave you with any questions. Have I mentioned that these are thought-provoking horror films? No? Well, this could explain why these films are “not the cup of tea” for everyone.

Until recently I haven’t heard about this franchise until it was recommended to me. I did some research, just enough to know what to expect before watching the films which are really difficult since spoilers are everywhere. I found out these are low budget independent film which was not the favorite of critics, certainly not the first and the second films. Suddenly I had enough reasons to check this franchise.  As a viewer you are kept in the dark about the world in which the story takes place, it is not clear who is responsible for the Cube and how people arrive in the cube. Hints are given in the second and third films but there is no concrete explanation.

How it all started?

Writer and Director Vincenzo Natali created a short film titled “Elevated” The short was filmed in an elevator. It was intended to give producers an idea of how Cube would hypothetically look like. Eventually, Natali got the financing he needed to start the project. The first film appears to take place in current times. What is interesting about the first film is that all character’s names are depicted from real prisons in Russia, U.S.A, U.K, and France. This tiny bit of information goes probably the first hint I would say but you’ll have to watch it to know more

The Cube design for the first film was created by David. W. Pavica. The cube consists of a cubical shell and the inner Cube. The inner cube consists of 17,576 (26 3 ) rooms, each having a side length of 15.5 feet. Each room has there identification numbers. These numbers encode the starting coordinates of the room. The numbers also determine the movement of the room and the subsequent positions are obtained by cubically subtracting the digits from one another. The resulting numbers are then successively added to the starting numbers. There is no indication of where or when the cube was built, or who build it. Is that so? The characters waking up in the cube are wondering the same thing as the audience.

The second film is a different story with a new group of people trapped in the Cube. This time the Cube is not an elaborated mechanical structure but slowly closing in on itself appears to control time, space, and reality the industrial-styled colored rooms are replaced with high tech, brightly lit chambers. This time it’s about time disruptions, time travel, and possibly parallel universes.

I have to admit that I was a little bit lost watching this movie. And the ending leaves you with even more questions which appear to be the intention of the filmmakers if you have the DVD, there is an alternate ending that gives a little bit more information.  Same as the first film, the second film in the series also received mixed reviews but was not as well received with the audience, which I could possibly understand.

The first film introduced the concept, the second film showed a more sophisticated technologically advanced concept and the third film gave us some answers on where it all started.

The third film is a prequel to the series. This time we will see people on the outside of the Cube who control the Cube and oversee those who went in it. It reveals more information but it still leaves some unanswered questions. I guess this is what the filmmakers wanted to give longevity to the franchise relevance and in a way it worked because they gained a cult following which is still growing over the years. There have been talks of a remake of the series in 2015. With the technology that we have today, more can be achieved by making independent films than 10 years ago so I have no doubt that more interesting stories can be made based on this Cube concept.

As I mentioned before I wasn’t aware of this series until recently.  I enjoyed watching the films probably because I had very low expectations and was pleasantly surprised with the first film. If I had followed what is said online I would have probably never seen these Sci-Fi films. Thanks to Cristina for recommending them to me. I tried my best to give you only the highlights without many spoilers. It was an interesting watch, the first film definitely is. I hope this was as interesting for you as it was for me.

Have you seen any of the Cube films?  Are you familiar with the franchise? Feel free to leave your thoughts and comments in the comment section below.

8 thoughts on “Looking into the Cube [Film] Series”