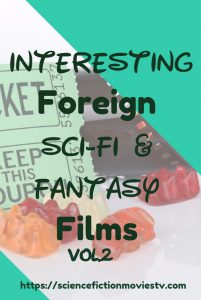 Thanks to online streaming services now we are able to watch movies we normally wouldn’t see at all. From old classics to the latest releases we now have access to films around the world.

As we continue looking into more Foreign Films, here is the next batch of 5 interesting Foreign Sci-Fi and Fantasy Films:

This 2003 Indian science fiction film is widely regarded as Bollywood’s very first science fiction film. For the western audience, the film may seem long with a running time of 166 minutes with an intermission (break) in the middle of the movie. In India, they literary have this break while in the rest of the world the film just continues rolling and there are song and dance sequences in the film.

The film has similar themes to E.T. The Extraterrestrial and was inspired by the Alien by Indian filmmaker Satyajit Ray. The film tells the story of an intellectually disabled boy Rohit who meets an alien called Jadoo. Jadoo helps him with his disabilities but there is a connection between them since the beginning of the story.

In addition to the whole central theme of friendship, there is also the theme of being different and how to handle it. It is a positive movie from which really is lacking these days. Humans can be very cruel but do we have to see the dark side in movies and TV again and again? At the same time, humans can be compassionate, loving, and try to do the right thing. Why not see more of this side? It could inspire others to become better human beings.

The film received positive reviews from critics and declared a blockbuster by the Indian box office. Even though it may seem like a familiar story to you, the way it was shot and the performances are completely different from what you have seen before, especially if you are not familiar with Indian cinema.

You will be emotionally invested in the story. In Indian cinema, filmmakers have the skill to bring out the emotional side of storytelling without doing much. The success of the film made it possible for the start of India’s first financially successful “superhero”  film franchise. The sequel “Krrish” is centered on Rohit’s son Krishna “Krrish” Mehra.

El laberinto del fauno is a dark fantasy film written and directed by Mexican filmmaker Guillermo del Toro. The Spanish title refers to the fauns of Roman mythology, while the English, German and French titles refer to the faun-like Greek deity Pan.  In the film, the realities of the Spanish civil war in 1944 are combined with a mythical world of mysterious creatures.

Pan’s Labyrinth received many positive reviews and was fortunately successful. Many scenes in the film are metaphors or thematically scenes from religion to the way we live life. There are so many that you’ll have to re-watch them to find them all. It’s not your traditional fairy tale so the atmosphere and the mystical creatures don’t look nice.

The filmmakers used make-up, animatronics, and CGI to create these creatures. The film had limited release had its premiere at the 2006 Cannes Film Festival. The film was well-received at Cannes. This helped to open doors in other countries where the film could be released. Probably without this success, the film would have received wide releases in many countries. The film received 6 Academy Award nominations: Best Art Direction, Best Cinematography, Best Makeup, Best Original Score, Best Original Screenplay, and Best Foreign Language Film. The film won the first 3 mentioned (nominations).

The film is a loose adaptation of Hans Christian Andersen’s “The Little Mermaid” directed and written by Anna Melikyan. The film tells the story of an introverted little girl who grows up believing that she has the power to make wishes come true.  She lives by the beach with her strange mother and grandmother and wishes for her father to come and rescue her. Later they move to Moscow and as a teenager is confronted with reality and discover all the wonders of the world with an optimistic point of view.

The film has nice cinematography and great performances. The film received positive reviews and was a box office success in Russia. Many praised the performance of the main lead and many others compare it to Amélie (2001). This modern interpretation of a classic fairy tale is very interesting to watch. The story basically has nothing to do with the traditional “Little Mermaid” story. The main themes of the movie are growing up and handling personal relationships. The film was selected for submission to the 2009 Academy Awards for the category of Best Foreign-language Film.

The film tells the story of scientist Vaseegaran, played by Rajinikanth, who creates an android named Chitti, also played by Rajinikanth, based on his own image to assist the Indian army. Later he manages to upgrade Chitti’s software to give it the ability to understand and show human emotions. Chitti unexpectedly falls in love with Sana, played by Aishwarya Rai, which is Vaseegaran’s girlfriend. Vaseegaran prepared Chitti for an evaluation by the Artificial Intelligence Research and Development (AIRD) Institute which is managed by Bohra, a rival of Vaseegaran. Chitti is manipulated by Bohra and fails the evaluation.

Enthiran received both positives and negative reviews from critics in India. Surprisingly internationally the critics and the audience were more enthusiastic. As of August 2017, the film has a score of 71 on rotten tomatoes. The film is the fourth highest-grossing South Indian film of all time after Baahubali 2: The Conclusion (2017), Baahubali: The Beginning (2015), and Kabali (2016) as of May 2017.

Enthiran won Best Special Effects and Best Production Design at the 58th National Film Awards. The film was dubbed in Hindi and in Telegu. The film was also known as India’s most expensive film at that time. The visual effects consisted of CGI, prosthetic make-up, and animatronics. The main theme of the movie is the battle between man and machine.

The film has some similarities with Mary Shelly’s Frankenstein novel (1818) and Terminator (1984). The film makes many references to scientific principles related to engineering, robotics, and computer science. The film is also a traditional Indian film which means that there will be some song and dance (don’t worry it’s entertaining) and of course its running time of approximately 3 hours is very common in Indian cinema. The film’s soundtrack was composed by A.R Rahman.

The film has an intermission (break) in the middle of the film. This “break” is provided in Indian movie theaters for the audience to take a very short break. In other countries this intermission is not applied which makes it seem like a long journey but once you are engaged in the storytime flies.

The sequel titled “2.0” is expected to be released worldwide on 25 January 2018.  The film will feature Rajinikanth reprising the roles of Dr. Vaseekaran and Chitti, alongside Akshay Kumar and Amy Jackson. The film will be released simultaneously in Tamil, Telugu, and Hindi and is expected to regain the title of the most expensive Sci-Fi Indian movie.

Trollhunter is a little bit an unconventional film because of its form of a found footage mock-documentary (mockumentary).  The film tells the story of a group of students from Volda University College that went to make a documentary about a suspected bear poacher Hans, played by Otto Jespersen.

The cast who played the students was a mixture of relatively unknown actors and well-known Norwegian comedians. As the story progresses the students interview local hunters at the site of an illegally slew bear who commented that the bear tracks look strange. As they continue to cover the story their life changes.

The film was critically acclaimed in Norway especially for combining Norwegian cultural elements with Hollywood influences. But of course, there were a few critics who didn’t like the mockumentary format of the film. Internationally the film was well received. Many thought that for a small budget movie by Hollywood standards it was a clever and, engaging horror movie, with some social satire all the while showing Norway’s beautiful nature and culture.

The film has many references to Norwegian culture and folktales including the belief that there are different species of trolls. The Norwegian folklore includes trolls that are big, strong, old having multiple heads, the ability to smell a Christian’s and a tail. Trolls eat rocks, meat and are sometimes man-eaters. Trolls are not so intelligent and there is a belief that they turn into stone when they are exposed to the sunlight.

Next to Norwegian culture and folktales the film also makes references to social issues specifically, the often heated conflict between farmers and animals eating their livestock and the farmer’s limited ability to handle the situation without breaking wildlife regulations. The film is considered as a Norwegian classic that elevated found footage filmmaking.

There you have them, another batch of interesting films to see from Mexico, Norway, Russia, and India. Have you ever watched any of these foreign films already? What is your experience with watching foreign films? If you have not seen any of the above-mentioned films, will you consider watching (one) them? If yes, which one would you watch? Click here for the next post with the third batch of interesting Foreign Sci-Fi and Fantasy films.