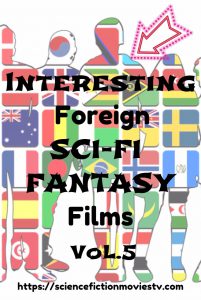 We’ve discussed some interesting foreign films in our previous posts Vol.1, Vol.2, Vol.3, and Vol.4 and we try to understand why it’s difficult to have Diverse Options on the Movie Menu.

As we continue looking into more Foreign Films, here is the next batch of 5 interesting Foreign Sci-Fi and Fantasy Films:

Viy tells the story of how Jonathan Green, a French traveler, and cartographer, takes a scientific journey to study the Ukrainian territories their people,e and their culture, from Western Europe to the East in the early 18th century. He finds himself in a small unknown village where the people are very different from what the cartographer is used to. They are an isolated group from the world that believes that they could save themselves from the evil outside, not understanding that evil is living with them and manipulating them.

The film is loosely based on the horror story of “Viy” by Nicolai Gogol. Creating the film was not an easy process when the producers decided to start the project in 2006. There was already another project based on Gogol’s tale in production Taras Bulba (2009) and the Witch (2006).

In order to secure to project they had to create a teaser trailer even, without any script. There was interest in the project and it grew from a simple screen version to a big-budget fantasy thriller. As time goes on with the project still in development, cinema-style was changing, and eventually, the filmmaker seriously decided to re-shoot the film in 3D. The film was shot in locations known as European Hollywood at the Gatteo, Barrandov, and Letnyanystudios in Prague.

Home production studios of many blockbusters like the Chronicles of Naria, Hellboy, Blade, and many others. One thing very peculiar of this film is the carriage in which Green travels. The carriage is mechanically modern while on the outside it has the appearance of an ordinary carriage from the 18th century. Besides, the carriage, Green has other technical gadgets including cartographic tools and equipment and what appears to be a tablet computer.

As mentioned before the film was shot in 3D. The visual effects included animatronics, virtual 3D monsters, and makeup artists. The soundtrack was composed by Antón Garcia. The film is the first installment of a trilogy and was released in 2014 in Russia. . The film was released in 2015 in the U.S and the U.K. The film was a commercial success in Russia and a sequel is in production titled Viy2: Journey to China. This sequel has Jackie Chan and Arnold Schwarzenegger as cast members. It is expected to be released during the 2017 winter season in Russia.

Guardians tell the story of four people who were experimented on to give them supernatural powers in order to defend the homeland from supernatural threats as a team. As usual, the process didn’t go as planned due to a mad scientist. Members of the team represent the different nationalities of the Soviet Union. The story seems very familiar. The process is interrupted by a mad scientist. The four individuals escape and living a life where they have to hide their true identity.

The film received negative reviews and was a box office bomb in Russia. The film had a budget of 47 USD million which is a significantly low budget for science fiction films nowadays. The negative reviews criticized the plot and the CGI. Why is this skill interesting you may ask? Even though it’s negatively criticized I think, the visual is still interesting to see how Russia does it with the budget that they had. So it would be interesting for others to check out the visual effects of this film.

The story doesn’t flow right leaving me to wonder if the plot holes are there because they assume the viewer already knows certain things. But the character’s backgrounds are also intriguing; each team member’s superpowers reflect the strengths and traditions of the people of the U.S.S.R.

As we don’t know much about the cinematography of Russia until now that we have streaming services it is nice to see how they interpret movie genres and create movies.  Additionally, we are able to see other sites of Russia that have not been filmed before.

The film is not worse than a bad Hollywood film (like the Transformers sequels) but it’s not an intellectual movie either. There were some instances where I wanted to fast forward. What kept me interested for a while it’s wanting to know the story of the team. The film has clearly western influences which may be the reason why it was so “unpopular” in Russia.

The film is the continuation of Baahubali: The Beginning and the final chapter of the story. Kattapa, played by Sathyaraj, continuous to narrate how he ended up killing Amarendra Baahubali, played by Prabhas.

The film was released in 4K High Definition format and the film received positive reviews. Many praised the film for the incredible fighting scenes in the performances. It was originally made in Telegu and Tamil and dubbed in Hindi, Malayalam, English, French, German and Japanese. The film premiered at the 2017 British Film Institute. Starring Tollywood actors Prabhas, Anushka Shetty, Rana Daggubati, and Sathyaraj. The actors worked very hard on the physical part of the characters.

Both movies in the series were shot almost back to back. After the success of the first part, the budget of the second was later increased. Taking time to review all elements of the movie process most of time pays off when the final product is released.

The director of Snowpiercer (2013) presented his second English/Korean film “Okja”. The screenplay was written by Bong Joon-Ho and Jon Ronson, who helped with the development of the English characters.

The film tells the story of how a successful corporation created a special kind of super pig. Twenty-six of the best pigs were sent to different locations around the world. The corporation will be in contact with the owners after 10 years to check the progress and select a winner as the best super pig.

One of those super pigs is Okja who lives with a young girl named Mija, played by Ahn-Seo-Hyun, and her grandfather, played by Byun Hee-Bong, in the countryside of South Korea. Okja is a very shy introverted unique animal. Despite her large size and appearance, her intelligence level is far above a dog’s.

Okja premiered at the 2017 Cannés Film Festival on May 18, 2017, and competed for the Palme d’Or. The film stars South Korean child actress Ahn-Seo-Hyun, Hollywood actors Tilda Swinton, Paul Dano, Steven Yeun, Lily Collins, and Jake Gyllenhaal. The central themes of the film are friendship, loyalty, and bravery. The film received mostly positive reviews and it’s worth checking out. The film is distributed by Netflix and branded as a Netflix Original Film, so you can look for it and check it out.

The film tells the story of Dea-Ho, an investigative journalist, who is investigating the abduction of his son, which happened three years ago. With the help of his psychiatrist friend, he tries to remember what happened through the use of lucid dream techniques. He eventually learns how to travel into the dreams of others. This last part sounds familiar, right? It’s interesting to see a Korean version of this concept.

The Director Kim Joon-Sung was indeed inspired to make the movie by the success of Inception (2010) and his own experiences with lucid dreams. The film was released on February 22, 2017. On June 2, 2017, Lucid Dream became a Netflix original film and it was released on the digital streaming platform in 190 Netflix-services countries.

Lucid Dream stars Go Soo, Sol Kyung-gu, Park Yoo-Chun, Kang Hye-Jjung, Park In-hwan, Chun Ho-jin, Jeon Seok-ho, and Lee Suk. This is the first difficult case to discuss among foreign films I’ve seen so far since it apparently had high expectations to reach domestically but in the end, it didn’t. The film did not do well at the box office in South Korea. So what happened?

There have been many occurrences around the movie including delay of the release date and controversies around the sexual assault and rape allegations against the actor, and K-Popstar Park Yoo-Chun. I wonder if any of these had any influence on the final evaluation of the critics. Some criticized the narrative, calling the plot predictable, and a recycle of Inception (2010). Others praised the visual effects and the performance of Go Soo.

In the end, Lucid Dream should be seen as a film with a different perspective of telling the story, and putting the film on the same boat as Inception (2010) is not fair. The concept is the same but the stories are different. It’s still interesting to see their style of filmmaking.

So there you have them! Another batch of interesting films to see from Russia, India, and South Korea. By now I hope you’ve watched a few foreign films already and I would like to hear about your experience watching them. Feel free to leave your comments.