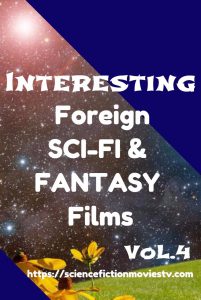 We’ve come so far with watching foreign movies that we now have an idea of the global cinema that exists. Is this statement true?

I don’t think so. We have just barely scratched the surface with the previous posts Vol.1, Vol.2 & Vol.3. There are still many movies to see and the concept of global cinema is far from the truth.

There may be some similarities in the way of making movies but every country has its own cinema style based on society, culture, folklore, and other elements that are relevant to the country. Since it has been established that there are many more movies to catch on to, let’s take a look at the next batch of interesting Sci-Fi and Fantasy foreign films:

The film tells the story takes place in 2054 in a futuristic Paris and tells the story of a French policeman investigating the kidnapping of a scientist.  This scientist may have discovered the key to eternal life.

The film was released on 15 March 2006. There are two versions of the film in French and English language. The English version has some known names such as Daniel Craig and Jonathan Pryce. Many found the English version had some misses in the translation and prefer the original French version.

The film was created with motion capture animation in which almost all images are exclusively black-and-white; only occasional color is used for detail. The visual effects were created with motion capture and computer graphics to form the film’s unique look. The cast performed their scenes in motion-capture suits in front of a blue screen. Computer animators translated these animations to digital models used for the characters. The final product is a visually stunning featured film.

The film received both positive and negative reviews from critics with many praising the visual effects. The film took six years to be completed. During those six years, Sin City (2005) was released, an animated neo-noir film with the similar cinema style of Renaissance. Fortunately, there are many who found Renaissance interesting to see but the truth is the concept was not as new to the public as the creators would have hoped. The film received the award for Best Feature Film at the 5th Festival of European Animated Feature Films and TV Specials.

Directed by Rajkumar Hirani PK tells the story of a humanoid alien, played by Aamir Khan, who comes to earth on a research mission. He lands in Rajasthan (India) bet gets stranded when the remote control of his spaceship is stolen. Later he meets a TV reporter Jaggu, played by Anushka Sharma, which is intrigued by him and the way he behaves.

She later saves him from getting arrested. Because of his strange behavior, people assume he is drunk and call him PK (spelled out Pee Kay which is a Hindi word for tipsy/drunk). People tell him that only God can help him, get his remote back PK sincerely practices every Indian religion trying to find God but is unsuccessful.

The film was released in 2014 in 22 international markets including India, U.K., Pakistan, Australia, China, and Japan. The film is currently the third highest-grossing Indian film of all time, after only Dangal (2016) and Baahubali 2: The Conclusion (2017). It made history for being the first Indian film to surpass USD10 million in U.S. and Canada. PK made noise in China and due to good word of mouth became the highest-grossing Indian film 72 hours after its release.

The film received positive reviews mostly for the direction, the writing, and the performance of Aamir as a socially awkward young man who walks and talks in a strange and enthusiastic manner (like a child) observe the way things are, and ask why they are, the way they are. It makes you think further and ignites discussions.

Being a film that questions religion, the whole journey before release was not easy for the filmmakers. Starting with being unable to film or continue filming at certain locations, the filmmakers being sued because of a scene where a man dressed as Lord Shiva is driving a rickshaw, a two or three-wheeled passenger cart, with two burqa-clad women as passengers.

A Public Interest Litigation was filed in court requesting the ban of the film after the first poster of the film was released. The poster featured Aamir Khan posing almost nude with only a radio cassette recorder covering his private parts. The ban was requested by India Human Rights and Social Justice Front because according to them it promoted nudity and vulgarity.

Activists of pro-Hindu organizations protested against certain scenes in the film, which they consider were hurting the religious sentiments of the Hindus. Some theaters were vandalized by those activists who demanded a ban on the movie. Among all the protests and court cases fortunately the film received support from government officials who provided a tax exception on entrainment tax to encourage people to go see the film in theaters. Fortunately, the film was accepted by audiences domestically and internationally.

The film is based on the French graphic novel “Le Transperceneige” by Jacques Lob, Benjamin Legrand, and Jean-Marc Rochette. The film is approximately 80% in English and is the first English-speaking film for director Bong Joon-Ho. You may remember this director’s name from the previous mention film “The Host” and this film was also mentioned in a previous post “4 easy ways to introduce sci-fi to your friends Part 3”.

The story takes place on a massive train that travels a circumnavigational track. On the train are the last humans on earth after an attempt in 2015 to stop global warming failed and created a new ice age instead. In 2031 the rich elites inhabit the front of the train which is comfortable and looks neat and clean. The poor (which are considered as scum) lives in the tail (back part) of the train under unfavorable conditions with only protein bars as food and are controlled under strict social rules.

The journey to create this film was not an easy one, from acquiring the copyrights to the original story to securing the crew and actors (including Chris Evans, Song Kang-Ho, Tilda Swinton, Jamie Bell, Octavia Spencer, Go Ah-Sung, John Hurt, and Ed Harris), and working on the visual effects to releasing it in the U.S. where the distributor requested the footage to be edited and adding opening and closing monologues. Bong declined to make those changes. Eventually, the film got released in an uncut form, and the distributor was changed

The film became one of the highest-grossing domestic films in South Korea and as of August 2017 remains the most expensive Korean film produced. As mentioned before Snowpiercer received positive reviews. Many praised the script, the direction, and the performances (especially Chris Evans and Tilda Swinton). Snowpiercer is a rare gem of sci-fi and is considered intellectually and artistically superior to many sci-fi thrillers.

The film tells the story of the lost heir of the fictional kingdom of Mahishmati who learns about his heritage and true identity. The film is the first installment of a two parts story. The film is based on the mythology around Swagami and Kattapa and comic book stories of Amar Chitra Katha. The comics were not about s superhero but they were more about the stories of India, the folklore, the mythology around historical heroes, and more.

The film was produced in Tollywood which is the center of Telegu language films in India. The fictional language Kilikili (also referred to as Kiliki) the language of the Kalakeyas (warrior Tale), is said to be the first fictitious language to be created for an Indian film.

It’s a great engaging adventure story of great coverage in the face of danger, leadership, the power of love, survival betrayal and loyalty. The film was a box office success. The Hindi dubbed version became the most successful dubbed film in India at that time. The Tamil version of the film faced some difficulties for a word that was used in the film.

A group of activists of the Dalit group Puratchi Pulikal Iyakkam threw petrol bombs outside a movie theater screening the Tamil version of the film. The words used in the movie were considered derogatory against Dalits. At the 63rd National Film Awards (India’s Oscars), the film won Best Feature Film becoming the first Telegu film to win this award and the film also won the awards for Best Special Effects. The film was screened at various film festivals and released in U.S., Canada, some countries in Europe, Asia, and Latin America. The second part will be discussed in the upcoming posts.

The film tells the story of an alien spaceship that crashes in Moscow destroying several buildings and causing the death of many people. The Russian government decided not to enter into contact with the ship and let it fix itself on its own. The landing area was evacuated and guarded. The Russian government immediately introduced martial law as many people grew angry and started to protest against the alien ship as the ship appears to attract water to restore itself. The story was inspired by the 2013 Biryulyovo riots.

Released on January 26, 2017, in Russia the film stars Irina Starshenbaum, Alexander Petrov, Oleg Menshikov, and Rinal Mukhametov. The film received positive reviews and was a box office hit. Many praised the movie for the visual effects, the performances, and the social commentary. The film became the fourth Russian movie released in IMAX 3D format and it looks great.

There you have them, another batch of interesting films to see from France, United Kingdom, Luxembourg, India, South Korea, and Russia. We hope that you’ve enjoyed reading this list. As the complete list of the interesting foreign films is long, we chose to present them in segments (Vol.1, Vol.2 & Vol.3).

I hope you’ve enjoyed all the segments. Further, we would like to improve you’re reading experience. For some movies, there is so much information to share that creating a short summary became really difficult. In other cases, there is so little information published about what happened during the filming and how the distribution took place that it became really difficult to create a good summary. The most common reasons are not enough marketing or not enough information published (because of the filmmakers’ limitations or the government state of the country of origin and its policies regarding film-making and marketing).

By now I hope you’ve watched a few foreign films already and I would like to know about your experience watching these films? Please share the movie title and from which country it comes with us. I would love to hear from you.