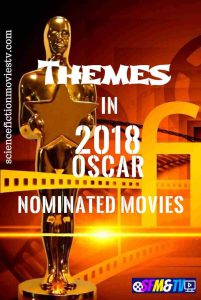 After knowing who the nominees are for the 2018 Oscars for Sci-Fi and Fantasy I took a moment to view all the different stories that the Academy Awards paid attention to. There is so much going on in the world and most of the ugly side of the human being is constantly shown.

While we acknowledge this ugly side we have to believe that we can improve and become better human beings. Most of the nominated films this year have addressed a social theme in some way in their stories.

We will focus on the most prominent Sci-Fi and Fantasy films nominated which are “Get out”, “Star Wars: The Last Jedi”, “Coco”, “War for the Planet of the Apes” and “The Shape of Water”, and discuss some of the themes they brought to the forefront.

“Get out” is a great example of bringing social themes, symbolism, and metaphors into the spotlight.  More specifically, the theme of white people hiding their racism behind progressive ideas is very prominent in the film. What at first seemed like a very friendly progressive white family turned out to be an extremely racist family.

The symbolism related to attitudes of racism, having a position of power, and the history of black America are so many I am not sure I caught them all, like the deer, the camera flash, the eating of cereal, the white car, and the sunken place. Overall they refer to topics that most (white) people don’t want to talk about. The film managed to address realism in a dramatic, thrilling, and at times strangely funny way.

“Star Wars: The Last Jedi” is showing a side we are not accustomed to seeing in these stories explored many controversial themes, some related to the Star Wars universe, others related to social aspects that are highlighted in the story. Let’s start with acknowledging the existence of a group with no side that benefits from war and will continue to benefit from it as everyone is busy fighting each other. It is uncomfortable for some people to see a side that is taking advantage of the war.

The film also addresses the weight of the past events in the characters life and its influence of it on their decision making. Another interesting topic is the idea that a Jedi can be found in various classes in society and does not necessarily come from an elite family. And that support for the rebellion can be found in various classes of society especially from those who have less. During the war, there are moments where winning is not the important thing to do as it will only cause more casualties. The films show characters fighting to preserve the light (Finn) versus characters who fight to win/become a hero (Po).

These are the themes that connected with me but there are many other themes that people connect to or recognize. Like the childish behavior of Kylo Ren, an immature man in a powerful position, sounds familiar? The film leaves most viewers thinking and reflecting on the many themes addressed in the film.

“Coco” shows light on the celebration of the day of death and its meaning. The day of the death is part of a 3 day Allhallowtide holiday season in the Western Christian religion. I discussed this holiday in my previous article “Looking into the Halloween”. The Allhallowtide is the occasion to honor the dead, including the saints, martyrs, and all faithful Christians that have departed.

The day of the Death is the 3rd day of the Allhallowtide and it is not given the same attention as Halloween (All Hallows Eve). Each day has its own meaning but it seems that the Day of the Death is not even acknowledged in many countries that took over the western way of celebrating Halloween. I’m wondering if they really know what they are “celebrating”.

But it is also not surprising that it is not widely known since it was eliminated by Pope Pius XII in the 20th century as a part of greater liturgical reform. It is strange how it was dismissed and yet Halloween is so strongly acknowledged to the point that it has become mostly about partying. “Coco” reminds us that even though it’s painful it is ok to honor those in our family that are no longer with us.

The War for the Planet of the Apes

“The War for the Planet of the Apes” shows us the ugly side of humans. Humans are not able to confront their biggest problem with a cool head. They become desperate, go to war and by doing so they regress in their humanity by becoming more animalistic (and barbaric) than the apes they are fighting against. “Apes Together Strong”, three words that have had a strong impact on society. In the film the strength of survival comes from supporting, working together, and standing against a more powerful group.

The Shape of Water

The Shape of Water addresses several interesting themes like seeing the beauty behind the looks. Rather than considering the Asset as a monster, it is considered as a being. And it is a contrast to the classic Beauty and the Beast story. Rather than changing its appearance, the Asset is understood and accepted instead of being feared. It also shows the possibility of friendship between individuals of completely different backgrounds by accepting, understanding, and respecting each other.

Another interesting theme is the life of single women; the movie shows the possibility of a woman being single and still is able to be happy and satisfied with her life. It breaks the norm that most women are confronted with of having a husband and family in their thirties.

Which social themes did resonate the most with you? Feel free to leave your comments. I would love to hear from you.