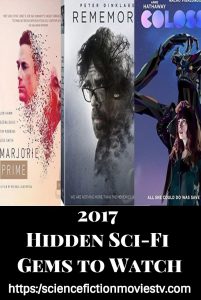 It has been a great year for science fiction. We have seen some great movies which probably were successful blockbusters, right?

Being a blockbuster entails success at the box office which is possible by using a great marketing campaign or with the movie watchers mouth to mouth strategy.

But what about those interesting movies that didn’t have great marketing exposure or enough budgets to be shown in theaters?  They are mostly known as underrated movies but here we will refer to them as hidden Sci-Fi gems. Which movies are we talking about then? Let’s have a look at five 2017good sci-fi movies to watch:

What if you could have a computerized (holographic) version of a deceased family member to talk to? Marjorie, a dying woman in her 80s (played by Lois Smith) decides to spend her final days with a holographic projection of her deceased husband.

This American Sci-Fi film premiered at the 2017 Sundance Film Festival and has received critical acclaim. It is a very intriguing (definitely thought-provoking) film that discusses the concepts of artificial intelligence, mortality and family memories. In terms of Sci-Fi, it is a simple film, with no big budget or fancy special effects, yet it still manages in a simple way to show a powerful story.

This British-American romantic Sci-Fi film produced by Netflix received mixed reviews from critics. I wonder why? On the surface, it focuses a lot on human truths and raises many questions which many may are not able to understand from a religious point of view.

It is a thought-provoking story which is something many are not accustomed to or simply are not interested in. Overall it is a complicated yet fascinating story having a little bit of drama and dark humor at the same time.

What if there was a device able to extract record and play a person’s memories? Gordon Dunn, a visionary scientist, invented this machine but was found dead shortly after presenting his work. Hearing about this invention was extremely impactful for one man (Peter Dinklage) who will steal it to try to solve the mystery of the scientist’s death. This investigation will lead him to dangerous places.

This American Sci-Fi mystery drama received negative reviews from critics but many movie viewers liked it. This is one of those movies that you have to watch and judge for yourself.

Among the cast of this movie, we are able to see the deceased Anton Yelching, mostly known in the Sci-Fi world for his role as Chekov in the J.J. Abrams Star Trek Movies. The film was released at the 2017 Sundance Film Festival and on Google Play before being released in theaters. It is another thought-provoking film centered on betrayal, deception, and guilt.

Seven identical sisters (played by Noomi Rapace)are trying to survive by taking turns to act as a common identity that is the same for all, only in their own room can they act as themselves, once outside they are someone else. Their grandfather (Willem Dafoe) taught them all they know. The names of the seven sisters are Monday, Tuesday, Wednesday, Thursday, Friday, Saturday, and Sunday. It all goes well, until one day Monday didn’t come back at the agreed time. So what happened to Monday? You’ll have to watch the film to find out.

The film is also known as “Seven Sisters” and is distributed by SND films, Vendôme Pictures and Netflix. Overall it is an interesting take on the one-child policy as a story that centers on survival and the right to live a life. What is even more interesting is the acting of Noomi Rapace in the film. She is playing all 7 different characters at the same time.

Acting in multiple roles seems to have become a trend. We have seen him in previous movies like Split (2016) and in TV shows like Orphan Black (2013-2017). It is a challenging project to take in general and so far the actors have done an amazing job.

Imagine you suddenly have the power to control a giant monster. This is the story of Gloria (played by Anne Hathaway) who becomes unemployed in New York and is forced to move back home in New England. When stories arise in the media about a giant creature that is destroying Seoul (South Korea), she somehow comes to the realization that she is connected to the giant. As damages escalate she must figure out why she has such a colossal effect on the world.

This film premiered at the 2016 Toronto International Film Festival and was released in 2017 in theaters in the U.S. This Sci-Fi black comedy film was very well received by critics.

It is an entertaining movie but it is not for everyone. It’s true that it is challenging for a niche audience but it also has entertainment that appeals to the general masses. It is a combination of a monster movie and a romantic comedy with social satire.

There you have them: five interesting movies that most movie watchers didn’t know about. Which of these films do you find most interesting and would be willing to watch it? Are there any other 2017 Sci-Fi films which according to you is also a hidden gem?