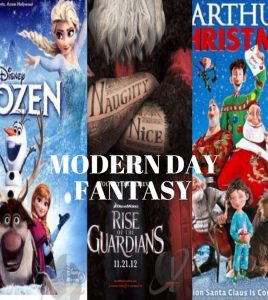 The process of making movies has evolved over the years and the quality of the final product has increased.

As a result, there are better movies to watch. In recent years HD and 3D animation have become very popular in the movie-making scene.

We have seen an increase in 3D animation, especially in children’s movies, especially in recent years. Let’s take a look at the three most interesting modern-day Christmas fantasy films from the last decade (excluding the film Shrek the Halls (2007) since it was already mentioned in the previous post):

The film tells the story of Santa Claus’s clumsy son Arthur Claus who discovered that Santa’s high-tech ship missed the delivery of one girl’s present. Arthur wants to save the little girl’s Christmas, so he goes on a mission to deliver her present.

This 3D computer-animated Christmas comedy film was very well received by critics and the audience which easily made it a Christmas favorite.

Based on the book series” The Guardians of Childhood” by William Joyce, the story is set about 300 years after the book’s series. The guardians Santa Claus, the Tooth Fairy, the Easter Bunny, and the Sandman are looking for the newly assigned guardian “Jack Frost”, who is not interested in the position since people don’t really believe in him. In the end, he will help the guardians to stop Pitch Black from bringing darkness into the world. But how?

You will have to see the film to find out. This 3D computer-animated fantasy film was successful at the box office and with the audience.

Probably one of the most successful Disney 3D computer-animated musical fantasy films of the last decade. It tells the story of two sisters and how they drifted apart due to circumstances. Can they come together again? The film won two Academy Awards for Best Animated Feature and Best Original Song (“Let it go”). The movie is definitely a children’s favorite.

An animated short sequel “frozen Forever” was shown in 2015 with Disney’s movie “Cinderella”. It does not stop there. This year a holiday short film titled “Olaf’s Frozen Adventure” was shown with Pixar’s movie “Coco”. Furthermore, a full-length sequel of the film is planned to be released in 2019.

Are you enjoying it so far? Which of these movies have you seen already? Are there any 3D animation Christmas Movies that have not been mentioned yet but are favorites of yours? Feel free to leave a comment in the section below.