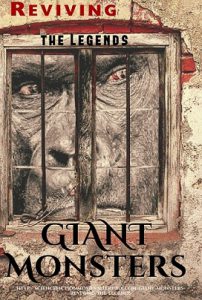 With so many new giant monsters movies in the pipeline, the trend of sci-fi horror continues strong. “What movies?” you may ask:

The first movie of the group to be released is King Kong: Skull Island. From the trailer, we get a glimpse into unknown territory that a group of people will go into not knowing what awaits them there.

We have always known King Kong as the big ape but in this trailer, you see it in bigger proportions. It’s impressively giant and scary. It shows how filmmaking and CGI developed through the years.  Just compare the existing King Kong films and you’ll see want I mean.

This movie trailer gives me great expectations for Godzilla. Based on the title of the movie I expect it to be bigger than Kong. Well, it has the title “God of Monsters” so I expect it to hold up to it.

The battle between Godzilla and Kong has been done before a long time ago. Will it end the same? Since Godzilla has a god title I’m expecting it to have a bigger chance at winning. But you never know maybe Kong can still take him down.

Now let’s talk a little about Pacific Rim. The first movie released in 2013 was ok. I was familiar with the concept of the movie because it was similar to an anime I saw a few years back (Neon Genesis Evangelion).

Here’s a thought: what if after the battle between Godzilla and Kong the world is at risk because the winner is lose, ready to destroy everything on its way and Pacific Rim has to come to the rescue. Imagine the battle between a Giant Robot and Godzilla or Kong? In the past there were already a few versions of Godzilla battling a robot version of it but I guess here it will be different.

The History of King Kong and Godzilla

Now let’s take a look at history at the classic giant monster movies so far. These are the of King Kong and Godzilla’s movies made through the years:

Obviously, Godzilla is the most popular. Its popularity is present mostly in Asia (Japan). With all the upcoming movies on the agenda, it will be exciting to see how to will promote them and how they will continue reviving the legends. Will you see all of them? Feel free the leave your comments. I would love to hear from you.