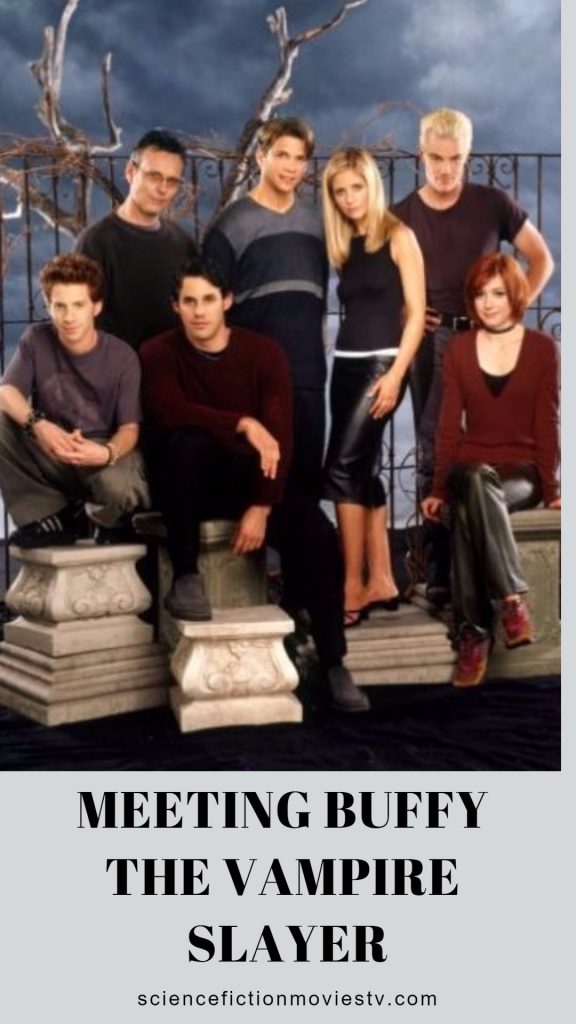 In Buffy the Vampire Slayer you will see vampires, witches, werewolves, demons, monsters, gypsies, slayers, secret symbols, rituals, ancient books, possessions, and alternate universes among other things. It’s engaging enough to get your attention and great to watch at any time. It’s female-empowering and has clever dialogues with hundreds of iconic lines in the show. Further, it has enough exciting action sequences to entertain everyone. It even has a musical episode. The show was on the air from 1997 to 2003.

TV show creator Joss Whedon noticed that classic horror films constantly had clueless blonde women who wandered at night and were swiftly killed by whatever evil creature was roaming. If the blonde wasn’t killed, she always needed a well-muscled male hero to save her. He thought it would be more interesting if the blonde went into the alley but wasn’t killed. Instead, she would defend herself and be the heroine.

He wrote a film based on this concept: a super-empowered heroine that fights against the powers of darkness. The idea was good enough for a studio company so they accepted to make the film. Sadly, there were a few misunderstandings between the director and the studio about the storyline and the final product was far from Whedon’s original vision. The film flopped at the box office.

However, there was something about the movie that caught the attention of the president of the WB network at that time. Gail Berman requested Joss Whedon to adapt the story to television. After seeing the unaired pilot the WB network agreed for to order 12 episodes.

The TV version is very different from the movie version. It’s not a sequel but some basic plot elements of the movie were taken as the base for the show. Whedon always stated that the movie does not exist in the TV show universe.

The TV version starts with Buffy Summers, played by Sarah Michelle Gellar, moving to Sunnydale (California) with her mother. Her parents got divorced and Buffy has been kicked out of her previous high school. It is the middle of her sophomore year of high school and Buffy has already been called as the next Vampire Slayer.  A Vampire Slayer comes from an ancient line of female warriors blessed and cursed with all the skills required for hunting and killing vampires (and other demons).

Sunnydale rests on a “Hellmouth” which is a literal gateway to other dimensions. It is a center of mystical energy which draws all sorts of evil beings to it (similar to the Sleepy Hollow TV show). For this reason, there is an endless amount of vampires and demons for Buffy to fight.

However, she won’t be fighting alone, because at school she quickly makes friends with a couple of outsiders (later known as the Scooby Gang): brainy Willow (played by Alyson Hannigan), snarky Xander (played by Nicholas Brendon), and her new Watcher, Rupert Giles (played by Anthony Stewart Head), who has the task of training and leading her in her duties as the Slayer. In addition, right at the beginning of the first season, we see the mean girl Cordelia (played by Charisma Carpenter) and the mysterious Angel (played by David Boreanaz) helping the gang.

The show is about taking responsibility for one’s life, dealing with life circumstances, and continue living. Over the course of seven seasons, all of the major characters struggle with these issues. All of them continually have to face up to new challenges in their lives and work hard to be better. 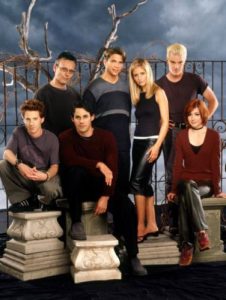 More than fighting vampires, the show is ultimately about fighting one’s inner demons, with the external demons being metaphors for what lies within oneself. As a result, all of the major characters changed dramatically as the show continues.

Another great theme of the show is unity. Buffy and the Scooby Gang achieve the most amazing things when they work together which sends a great message: even with all their differences, united they are stronger.

The show was brilliantly written on multiple levels. All episodes were good but some of the character’s lines were amazing. The transition from the writing to the filming part was well executed during all seasons. The stories are dramatic, believable, emotional, and funny. The show managed to handle several genres at once making it difficult to classify it under only one genre.

All of the actors did a great job working on the characters they played and there were some truly memorable characters, from Buffy to Willow, Xander, Spike, Giles, Cordelia, Anya, and Angel (who went on to star in his own spin-off show).It was one of the few shows on TV to have its own unique look. For example, Buffy inevitably went on patrol wearing some incredibly stylish outfit.

The show still holds up over time because of its dialogue and the back and forth between the characters and their chemistry that comes through on screen even when there was some heavy makeup used (I’m thinking about Spike and Angel).

Another thing that keeps the show vibrant over the years is that all actors were cast in their prime and at the top of their craft. Even if some people find a few of the plot lines too melodramatic, the stunt work and choreography really hold up to repeated viewings.

The story continued in comic book form since the show ended adding so far 3 seasons and a few additional stories to the Buffy universe. For more information on where to find these comic books click here.

The show allowed us to take a look at ourselves and see who we truly are: at once stronger than we thought we could be and weaker than we’d like to let on.

And, even though it was a great TV show, it was never nominated for an Emmy or a Golden Globe. But many across the globe liked the show and Buffy became an unlikely female role model for future generations.

There is nothing like this on television anymore, so you will really appreciate the quality of the storylines. Nowadays many shows are unable to achieve the perfect balance of different genres as this show did. Buffy the Vampire Slayer is a TV show that is worth holding on to for future generations. What do you think of Buffy? Feel free to leave your comments. I would love to hear from you.