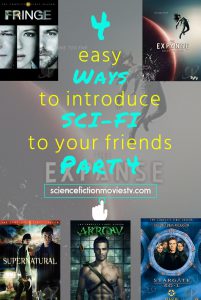 This is the final installment in the series 4 easy ways to introduce Sci-Fi to your friends. So far we have seen that Books, Video Games and Movies are great ways to spike some interest into Sci-Fi. In this post I will discuss the last option (and my favorite) in this series: binge-watching TV Shows.

Binge-watching has become extremely popular with the rise of digital streaming. But what is binge-watching exactly?

Binge-watching is when you’re able to watch multiple episodes at your own time without any annoying commercials. Binge-watching is not something new, it has been around already with people buying DVDs of their favorite shows.

Now, it’s true there are many TV Shows to choose from, and surprisingly this time I’m going away from the traditional recommendations like the Star Trek series and the X-Files. Not that they’re not good, of course, they are, it’s just that I think most people have watched them at some point. Instead, I will recommend some equally good shows to watch. Here they are:

Fringe follows Olivia Dunham (Anna Torv), Peter Bishop (Joshua Jackson), and Walter Bishop (John Noble) who are members of the fictional Fringe Division of the Federal Bureau of Investigation, based in Boston (US), under the supervision of Homeland Security.

The team uses fringe science and FBI investigative techniques to investigate a series of unusual happenings, which are related to mysteries surrounding a parallel universe.

The story is well thought and gets you engaged till the end. The show ran from 2008 to 2013 and had 5 seasons. Find the complete series or Season 1 to watch!

Supernatural follows the two brothers as Sam Winchester (Jared Padalecki)  and  Dean Winchester (Jensen Ackles) who due to circumstances took the decision to become hunters following their father’s footsteps. They hunt demons, ghosts, monsters, and other supernatural beings.

It’s quite amazing how they have managed this show: the stories are engaging even though sometimes to tend to be very ridiculous and they pay attention to fans (which has paid off). The series has become very popular and has now many books in stores based on the series. The series is still running now at season 12 and the stories get crazier by the minute. Find the first season to watch!

Stargate SG1 is based on the idea of an alien Einstein Rosen bridge device (the Stargate) that enables nearly instantaneous travel across the cosmos.  The franchise began with the film “Stargate”, released on October 28, 1994.

The concept is very intriguing as a military team travels through the Stargate to unknown worlds facing challenges and threats. The series ran from 1997 to 2007 in 10 seasons. Season 10 finalizes with the film “The Ark of Truth”. Find Season 1 to watch!

Arrow is based on the DC comic book character Green Arrow. The story is about billionaire playboy Oliver Queen (Stephen Amell), who, five years after being stranded on a hostile island, returns home to fight crime and corruption as a secret vigilante (initially called “The Hood” whose weapon of choice is a bow and arrow.

The story is very engaging during the first and second seasons. Due to the success of the show, it paved pay to the other superhero shows like The Flash, Legends of Tomorrow, and Supergirl sharing the same universe (The Arrowverse). The series is still running now at season 5. Find Season 1 & Season 2 to watch!

The Expanse is based on a series of novels by James S. A. Corey and set in a future where humanity has colonized the Solar System.  It follows United Nations executive Chrisjen Avasarala (Shohreh Aghdashloo), police detective Josephus Miller (Thomas Jane), and ship’s officer Jim Holden (Steven Strait) and his crew as they investigate a conspiracy that threatens peace in the system and the survival of humanity.

The story is very intriguing and the visuals look great. Unlike the other recommended shows with twenty-something episodes each season, this one has 10 episodes the first season and a 13-episode second season. The show was renewed for a 13-episode third season to air in 2018. Find Season 1 to watch!

What did you think about the above recommendations? Do you have a few of your own for Sci-Fi beginners? Will you consider binge-watching TV Shows? After going through all the 4 ways to introduce Sci-Fi (Books, Video Games,  Movies, or TV Shows) which method do you prefer the most?