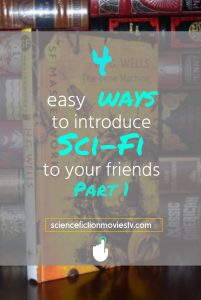 Science fiction tries to provoke a response about a positive or negative future, focusing on issues that need to be dealt with by everyone, not just by scientists and governments.

In some cases science fiction has caught up with us. Apple’s personal assistant Siri is a reality today of the possibility to have a personal bond with our computers (think of the movies like “Her”). Research into self-healing implants has brought the idea of enhancing our bodies to make us more than human.

Think of the Nanotechnology used in the “Arrowverse” (Arrowverse is the shared universe much like the DC universe that connects the stories of the superhero shows on the CW).

The future isn’t as far-fetched as it used to be.  Most of the time it feels like the futures we see on screen should already be here, or are already here even when they aren’t. As the line between real-world science and science fiction becomes increasingly fluid, the future is closer that it has ever felt before.

Nowadays it’s really easy to start a conversation about Sci-Fi. One example is the creation of a passenger Drone which was just a fantasy illustrated in the animated TV the Jetsons in the sixties.

Or the tablets we daily use which were just a fantasy in the Star Trek TV show many years ago. If you want to get more people interested there are ways to do it.  In this first post I will discuss the first of the 4 ways to introduce sci-fi to your friends:

There are so many books about science fiction to read. Forming your own book club or join an existing one could be a great idea to start a conversation with your friends about sci-fi. Here are a few recommended book titles: 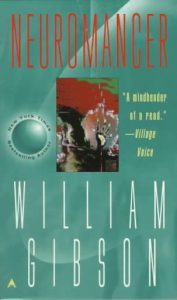 The story about Case (a hacker) who has been treated with drugs to stop him from accessing the Matrix ever again and Molly (a street samurai) who offers Case a cure in exchange for his services.

Through a violent world of double-dealing corporations and government cover-ups, Case and Molly risk their lives in cyberspace, following a trail that eventually leads them to Wintermute, a powerful AI at a time when machine intelligence is banned.

The novel catches the zeitgeist of the cyber world giving us terms like “cyberspace” and being instrumental in the way the World Wide Web was developed (1). 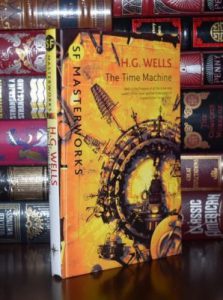 The Time Machine was the first novel to consider the idea of time as a dimension, and therefore devise a machine that would allow you to travel at will through time.

The novel begins in late Victorian Britain when a small group of acquaintances is summoned to meet at the house of an eccentric inventor. When he finally bursts in, late, the inventor has an amazing story to tell, for he has invented a device that will allow him to travel through time.

When he travels hundreds of thousands of years in the future, he arrives in what seems like a peaceful meadow in which beautiful, innocent people, the Eloi, live in peace. But there is a dark secret in this world, the monstrous Morlocks who live underground and emerge only to feast upon the Eloi.

There can be very few more influential works in the entire history of science fiction. Before this, time travel had been a form of magic or dream, but now it became something we could control (1). 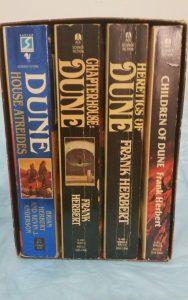 The story begins with a drug, the “spice” melange, which is essential for the mental powers of the Bene Gesserit sisterhood, and also for space travel. Whoever controls mélange has immense political power.

The drug is found in only one place, the desert world Arrakis, but when the Emperor gives control of Arrakis to the Atreides family it is actually a trap, and when power-hungry Baron Harkonnen springs the trap only young Paul Atreides and his mother are able to escape into the desert.

It’s an action-packed adventure story that keeps you engaged from the first page to the last. But alongside the action, there’s a potent ecological message that just gets more relevant as time goes on (1). 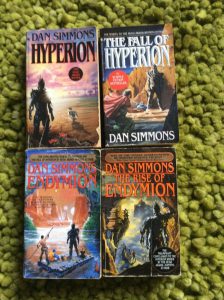 The whole series is based on the assumption that man’s conquering the stars is inevitable and the complexities and troubles this brings. It’s a wild, wild ride and one of the best damn science fiction books/series ever written.

The first pair of novels, Hyperion and The Fall of Hyperion introduces a group of six travelers who set out on a pilgrimage to the Time Tombs on Hyperion, a pilgrimage that is a certain death sentence.

For these pilgrims are seeking out the Shrike, a god-like creature that legend says will kill all but one pilgrim, granting the one survivor a wish.

The second pair of novels, Endymion and The Rise of Endymion, the story is set 300 years later and concerns a soldier, Raul Endymion who is unfairly condemned to death and rescued to perform dangerous tasks. The most important of these is to protect Aenea, a time traveler from the past who represents a threat to the all-powerful Church.

The stories are about suffering, from the dying world that’s on the verge of collapse, to the tortured pilgrims who’ve given up all hope and are gambling their lives, to the ” hope” the pilgrims are seeking.

Hyperion, even in 2016, still stands as the gold standard of how to do complex space opera right. Hyperion is a deeply human story about flawed humans. But it also covers romance, action, space battles, AI gone amok, time travel, and much more (1).

For those of you who are not so much interested in books, there are many short stories published online (like Daily Science Fiction)  which you can discuss in your group. Stay tuned for the next post which will discuss the second way to introduce sci-fi to your friends (one hint: Video Games). 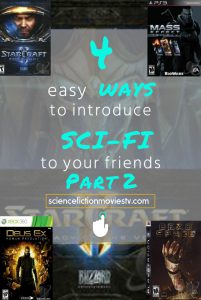 What did you think about the recommendations? Do you have a few of your own? Will you consider buying a sci-fi book as a gift to your friends? Feel free to leave your comments. I would love to hear from you.