Looking at The Jetsons 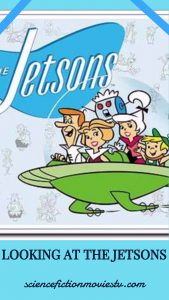 The show was the third primetime series from the Hanna-Barbera Studio, after The Flintstones and Top Cat (1961).  The show aired just 24 episodes after its debut on Sunday, September 23, 1962, but more episodes were made in the mid-1980s adding a second and third season. (8)

Today this show stands as the single most important piece of 20th-century futurism on records.  Whether some people agree or not this show had a profound impact on the way we think and talk about the future.

Looking at the projected Future

Even though it’s from the early sixties, The Jetsons TV show is still a reference when talking about the technological advancements that are constantly happening around the world.

People refer to “The Jetsons” as a creation of the golden age of futurism. Many items in the show like jetpacks, flying cars, robot maids, automatic food processors, moving sidewalks and even drones, are references to this futuristic idea. (2)

However, nothing presented in the show was a new idea in 1962, but what the creators of the show did successfully was to create an entertaining story and impressive illustrations for kids at the time. (2)

Even though it was just a cartoon it was based on very real expectations for the future. According to Danny Graydon (The Jetsons: The Official Cartoon Guide), the creators and artists got inspiration from futurist books of the time.

The launch of Sputnik by the Soviets in 1957 created great anxiety in an American public that was aware of the Communist threat. In February 1962 John Glenn became the first American to orbit the Earth. Just imagine what the future could hold was exciting and terrifying at the same time. (2)

The show provided an idea of how the American family would be in the future. The world of ”The Jetsons” showed people with very few concerns about political and social changes, but instead showed a technologically advanced culture where the largest concern of the middle class was getting a push-button finger. Despite this apparent easiness of life, the characters in the show often complain of exhausting hard labor and the difficulties of living in their era. (2)

Looking at the Colors 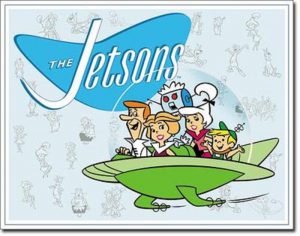 “The Jetsons” was the first show ever broadcast in color on ABC, but it was still up to individual affiliates as to whether the show would be broadcast in color. According to September 23, 1962, New York Times, only people with access to ABC’s owned-and-operated stations in New York, Chicago, Detroit, San Francisco, and Los Angeles were guaranteed to see the show broadcast in color, provided you owned a color set.(2)

Following its prime-time cancellation, ABC placed reruns of The Jetsons on its Saturday morning schedule for the 1963–1964 season. The program would spend the next two decades on Saturday mornings, with subsequent runs on CBS  and NBC.(2)

The Jetsons is one of the few series to have aired on each of the Big Three television networks in the United States. (2)

In 1984, Hanna-Barbera began producing new episodes specifically for syndication; by September 1985, the 24 episodes from the first season were combined with 41 new episodes and began airing in the morning or late afternoon time slots in 80 U.S. media markets, including the 30 largest.(5)

During 1987, 10 additional “season 3” episodes were also made available for syndication. (6)

Personally, I think that the season 1 episodes are completely different from the 80s episodes created for syndication. To me, it is indeed the same concept but presented in a different way and not a continuation of the 60s version.

There is no discussion about the science fiction (space) elements of the show: The Jetsons live in an era where space colonization is already established. Life in outer space is depicted as a fact of life, while the reasons behind humanity’s take over of outer space are never explained. (7)

Looking at the Characters

The Jetson family lives in Orbit City. The city’s architecture is rendered in the Googie style, and all homes and businesses are raised high above the ground on adjustable columns.(1)

George Jetson lives with his family in the Skypad Apartments. George commutes to work in an aerocar that resembles a flying saucer with a transparent bubble top.(1)

Daily life is characterized as being comically leisurely because of the incredible sophistication and number of labor-saving devices, which occasionally break down with humorous results. (1)

George Jetson (the protagonist of the show), is a loving 40-year-old family man who always seems to make the wrong decision. He works full time, 15 hours a week at Spacely’s Sprockets as a computer engineer. He is married to Jane.(1) (8)

Jane (33) is obsessed with fashion and new gadgets and her favorite store is Mooning Dales. She is also a dutiful wife who always tries to make life as pleasant as possible for her family as a homemaker. Outside the home, she is a member of the Galaxy Women Historical Society and is a fan of Leonardo de Venus and Picasso Pia.(1) (8)

Housekeeping is seen to by a robot maid, Rosie, which handles chores not otherwise rendered trivial by the home’s numerous push-button Space Age-envisioned conveniences. She’s an outdated model but the Jetsons love her and would never trade her for a newer model. Rosie does all the household chores and some of the parenting. She is a strong disciplinarian and occasionally dispenses advice to the family. (1) (8)

The family dog Astro can mumble and say his words beginning with R’s. Astro’s catchphrases are “Ruh-roh!” and “Right, Reorge!” or “Rats Rall Right Reorge!” Later Hanna-Barbera cartoon dogs, including Scooby-Doo and Muttley, would have the same speech impediment; voice actor Don Messick played all three.(1) (8)Orbitty is also able to change color to reflect his emotions.

In the first episode of the 1980s show, an alien named Orbity joined the family. He is a furry animal, resembling a monkey, but with a built-in slinky/spring. Elroy found Orbity on a field trip to Mars and brought it home. Orbity is a friendly pet, incredibly smart and always in a good mood.(1) (8) Orbitty is also able to change color to reflect his emotions.

Henry Orbit: age unknown, is the Jetsons’ apartment repairman. He is always helpful and always in a good mood. His robot, Mack, has a crush on Rosie. (1) (8)

George’s workday consists of pressing a single computer button. Typical episodes involve Mr. Spacely (George Jetsons Boss) firing and rehiring George Jetson, or promoting and demoting him. He is a “little person” with brown hair and a bad temper.

R.U.D.I. is George’s work computer. His name is an acronym for Referential Universal Differential Index. He has a human personality and is a member of the Society Preventing Cruelty to Humans.

Mr. Spacely has a competitor, H. G. Cogswell, owner of the rival company Cogswell Cogs. He owns the Cogswell’s Cogs company and causes a lot of trouble for Cosmo and George. (1) (8)

Names of locations, events and devices are often puns or derivatives of contemporary analogs with explicit space-age twists. The same technique was used in The Flintstones with archaic or stone-age twists.(8)

Looking at the intro and hearing the Music

This catchy intro of the show is one of the most remembered & recognized:

The 1962 episode “A Date With Jet Screamer”, in which daughter Judy Jetson wins a date with a rock star, provided the song “Eep Opp Ork Ah-Ah (Means I Love You)” written by Hoyt Curtin, William Hanna, and Joseph Barbara. The episode was a surrealistic Busby Berkeley-in-space affair that prefigured conceptual MTV videos by decades.(8)

A cover of “Eep Opp Ork Ah-Ah (Means I Love You)“, performed by Violent Femmes, is included on the 1995 tribute album Saturday Morning: Cartoons’ Greatest Hits, produced by Ralph Sall for MCA Records.(8)

Besides the increased presence of Rosie and the addition of Orbitty, further differences between the 1960s version and 1980s version include the following(8):

Looking at the Jetson’s presence

Looking at the Legacy

Looking at our place in the future

If we accept that media has an influence on the way that we view culture, and our own place in the future (as “The Jetsons” seems to ask us to do) we have to ask ourselves how our expectations might have changed with subtle tweaks to the Jetson story. (2)

What if George took a flying bus or monorail instead of a flying car? What if Jane Jetson worked outside of the home? What if the show had a single African-American character? These questions are impossible to answer, of course, but they’re important to recall as we examine this show that so dramatically shaped our understanding of tomorrow. (2)

“The Jetsons” is a great animated show for kids and adults. It gives a view of how people in the sixties and eighties thought about the future and we can also see how some of their ideas became a reality in our daily lives. It also inspires us to think outside the box. 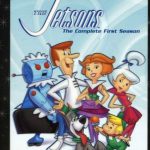 6 thoughts on “Looking at The Jetsons”