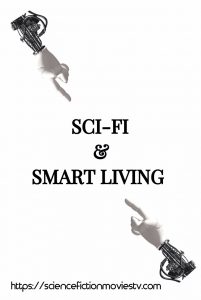 Sci-Fi and Smart Living are two concepts that appear to go hand in hand this century.

Today we enjoy an easier living than our ancestors and most of it is thanks to the technologies we created to help us in our daily lives.

Smart living is a trend that basically promotes original and innovative solutions with the purpose of providing benefits that will make life more efficient, sustainable, productive, etc. in other words creating new smart ways of living.

People may not believe it, but technologies of today were mostly influenced or inspired by Science Fiction (Sci-Fi). Most people believe that the technologies they use today are the products of the workings of ingenious innovators as they work on their research labs aiming to invent new products to solve problems.

However, today’s pioneering inventions had initially little to do with science and technology. The truth is they were born out of the imagination, talent, and inspiration of those people with the ability to create future worlds in their minds outside the constraints of the present world.

Where did today’s technologies come from? Who inspired them? Sci-Fi is the source of ingenious gadgets offering convenience in your everyday life. It undoubtedly inspired people to create once unimaginable gadgets that change lives to smart living.

Today people enjoy the Sci-Fi gadgets they only once saw in movies including Portable phones, Flat Screen TV, Tablets, Security Camera App and more. Movie & TV franchises like “Star Wars” and “Star Trek” have accurately predicted and cemented the path towards the era of technology.

“Star Wars” (once one of the leading movie franchises in history) successfully changed all sorts of things in society. It changed things including fashion, merchandising, product design, and movies.

As it got bigger and bigger, “Star Wars” influence got deeper and deeper too that it has now become inescapable. It is evident how sci-fi movies highly influenced the way people live and you are wondering how important science fiction is in the evolution of human society.

Another important and great example is the “Star Trek” Franchise starting with the original series in the 1960s that inspired the smart living way. Many Star Trek gadgets that were once just Sci-Fi, today these gadgets and technologies exist.

Of course creators of “Star Trek” were inspired by the existing Sci-Fi ideas established way before the 1960s. The list can go on and on about all the gadgets and technologies that were inspired by Star Trek: a goldmine of a once considered futuristic technology.

Sci-Fi’s influence on people’s way of living is essential for a number of reasons. For one, science fiction can inspire you to become a scientist, to become the inventor of new technology or product that the future will reveal.

If you ask scientists and inventors you know, it is very likely you will meet a fan of science fiction stories. You will probably meet a person that drew inspiration from reading stories such as Journey to the Center of the Earth by Jules Verne, Brave New World by Aldous Huxley, 1984 by George Orwell, Starship Troopers by Robert A. Heinlein, etc.

Perhaps, the most important influence of Sci-Fi is being the only genre depicting the way society can function differently. From the wild imaginations of Sci-Fi authors, people are able to somehow take a peek at how the future looks like.

Just think of the way that people live today and compare them to the stories you read before. They are remarkably similar and wondrous that it may not be an impossibility at all that soon we will reach the time of flying cars.

The world today continues to develop new technologies and products that most people do not think possible and those are enough testaments of all the things that people can achieve and improve like self-driving electric cars and drones.

Truly, human’s limitations are only the depth of his imagination, and Sci-Fi authors have profound imaginations of the future.  Like for example in the technology used in Her (2014) is similar to Amazon’s Alexa and Alexa came just two years after the movie was released. What a coincidence, right?

One Sci-Fi inspiration that everyone is expecting to flourish and became reality is the flying car. The possibility of actually having a flying car is getting closer and closer with research companies investing in projects that will take the project forward.

A flying car, an idea that was just an illusion of a futuristic future in the 1960s through the TV show “The Jetsons”. True it may take a while for us to create to infrastructure for flying cars but it’s not a far-fetched impossible idea anymore.

What technologies inspired by Sci-Fi movies or television shows did impress you the most? Which gadgets are you happy to have now in your lifetime? Could you imagine a life without those gadgets? Feel free to leave your comments. I would love to hear from you.

14 thoughts on “Sci-Fi and Smart Living”