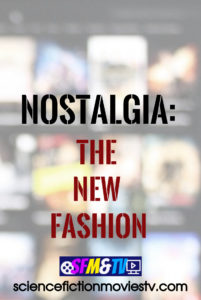 It is no secret that businesses use nostalgia as a means to gain more customers. People tend to identify themselves with the material they are familiar with. You see it in films, and on TV by counting up the many reboots and remakes that are made. This is not a new phenomenon but reboots have exponentially increased in recent years on film and television. It has become the new money machine.

Those with different ideas are often overshadowed by the reboot/remake “cash flow project”. But not everything is lost. In the past, a handful of big studios were the main producers of films and TV shows.  Today the landscape looks different. There are more accepting platforms for creators to expose their art. These platforms offer a variety of content that is often created on modest budgets.

Surprisingly, many of these projects are great. It is great to see art from all countries. Reboots and remakes are not all bad. There are those creators who really study the material and understand the characters and manage to create something different.  You often find these creators on the streaming platform rather than with big studios. With the exception of Marvel Studios, there is not much attention provided on the creativity part of the project. The selection of the team and who will be in charge is often determined by who is the flavor of the month, rather than choosing those who have knowledge of the material.

There is nothing bad about appreciating the original version study the imperfections and make something better but how often does that happen? There is so much pressure in honoring the original but that pressure is justified.

Most of the time studios take advantage of the nostalgia to get people watching by promoting the project in a certain way. Their goal is to sell tickets and make money. Whether the promotion was not in line with the final product is not their problem. The actors are most probably the ones that will face the backlash. Is it fair? This is hard to say. Sometimes they work to the best of their abilities to make it work. For some, it is the only way source of income they have.

The nostalgia trend doesn’t only cover reboots and remake on film and television but we also see it with the transition from the original “well-known source material” into the film. Especially in the Sci-Fi genre, we see a lot of video games, card games, and mangas turned into a film.

So what is different today? Those streaming platforms we mentioned before providing the platform to share content on an international level.  The result is that we are exposed to stories told from different countries. It is how we discovered the true Asian cinema as it is not as it has been portrayed by the big players. It is probably why today so many people want to see true representation. Let’s be honest, when we use to talk about Asian cinema, we often think of Chinese cinema because that is how it has been referred to in the west.

Asian cinema can be considered as the umbrella for Chinese, Japanese, Korean, Indian, and so on. It is how we learned that Japanese stories are best told by the Japanese themselves. The live-action movies of the anime’s Full Metal Alchemist and Bleach are great examples. If it wasn’t for streaming services the rest of the world wouldn’t have access to these movies. Unlike, Dragon Ball, Avatar: The Last Airbender, and Ghost in the Shell projects that attempted by Hollywood.  Even though it may seem as profitable relying only on nostalgia increases the risk of failure.

What do you think? Feel free to leave your comments in the comment section below.

2 thoughts on “Nostalgia: The New Fashion”