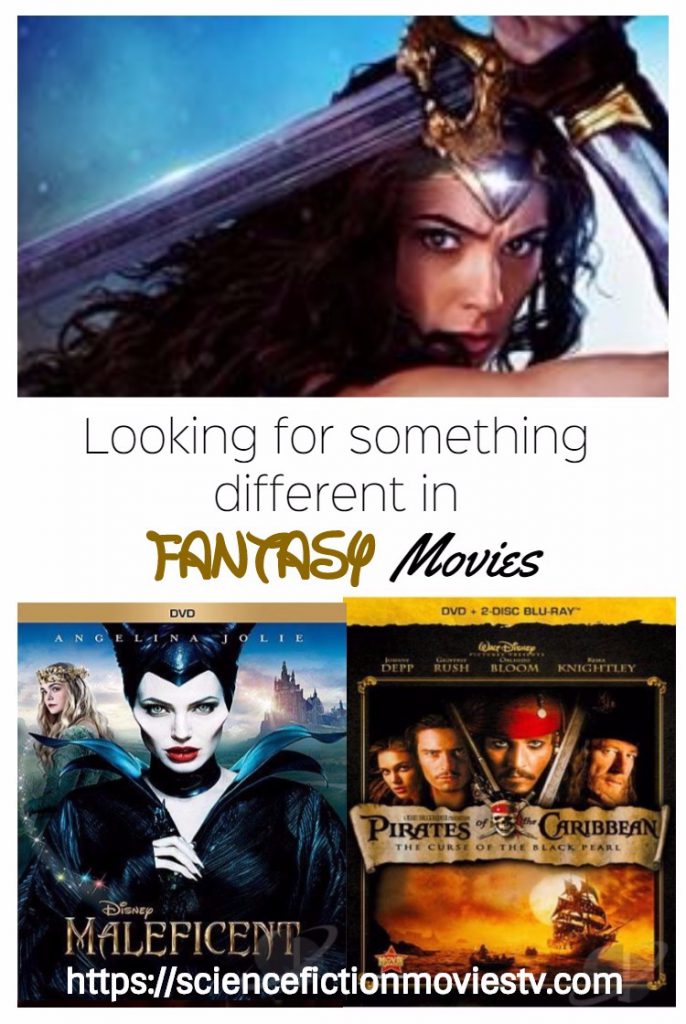 The beautiful thing about the Fantasy movie genre is that you can think of almost anything to create a story. The power of imagination is infinite. If it is so, why don’t we see more original stories?

Looking for something different in Fantasy Movies? Don’t think they exist? Here are 3 films where the creator took an unconventional approach and presented unique stories and characters:

Pirates of the Caribbean: Curse of the Black Pearl (2003)

The film was released on July 9, 2015, and received positive reviews from critics. And it unexpectedly did very well at the box office. Truth is many journalists expected the film to fail since according to them a story of pirates did not have a place at that time in cinema.  The film received five Academy Award nominations including Best Actor, Best Makeup, Best Sound Editing, Best Sound Mixing and Best Visual Effects.

Pirates of the Caribbean: Curse of the Black Pearl was well received by audiences. It unexpectedly surpassed everyone’s expectations and became successful and popular.

A concept that was unthinkable to succeed on the big screen (a group of pirates sailing seemed old-fashioned) managed to get the audience’s attention. Its popularity ensured the production of four more sequels.  Unfortunately, as it’s the case with many move franchises the stories that followed weren’t as great as the “Black Pearl” story.

Maleficent is a dark fantasy film based on Charles Perrault’s original fairy tale “The Sleeping Beauty in the Woods” and inspired by the movie Sleeping Beauty (1959). The film was directed by Robert Stromberg. The film tells an unconventional story from the point of you of the antagonist Maleficent (played by Angelina Jolie) of the story.

Released on May 30, 2014, the film received mixed reviews which could be the best scenario for this kind of movie. The people who liked it praised the acting of Jolie and the refreshing storytelling.

Others didn’t like it because it may have painted Maleficent as the hero of the story which isn’t a lie either, she is the hero of her own story and the story of the film is about her (her struggles, her survival, and her wrong choices). Clearly, not everyone was happy with this movie but is completely understandable. Why?

For years we have been bombarded with the perfect princess and the perfect prince and pushed into thinking that we could be those princesses and princesses. Even though Maleficent is the villain in the conventional perfect story, people could relate to her and understand why she took those choices. The human being is very complex and faces many choices and sometimes takes the wrong decisions. However, people can realize their mistakes when they remember their morals and values. Being a victim does not justify doing wrong to others and blaming others for your own shortcomings and mistakes is not right.

When you think about it’s not surprising that it did well. There was a market for this kind of movie. One indicator was the fan following of the Avenges (2012). Even though the story of the film is about how the Avengers save the day and stopped Loki from ruling earth, Loki was unexpectedly one of the most popular characters among  Marvel fans. Why? Even though his behavior was not right people could relate to his situation and could see why he did the things he did and showed, at least to me, the responsibility of parents and the importance of good parenting. While being a good human being is what everyone aspires to be there are situations where your actions may not be the best choice because there is nobody to help make that choice.

Even if you make the wrong choices acknowledging them and trying to do the right thing will help you but sometimes in those situations, you’ll need a push from someone. The success of “Maleficent” showed that there is a market for these types of stories but they need to show the villain as the villain in the end.

Based on the DC Comics character “Wonder Woman” and directed by Patty Jenkins the film tells the story of the origins of Princess Diana (played by Gal Gadot) from the Amazon island of Themyscira.

One Day Diana sees a plane crashing offshore and goes to help the pilot (Steve Trevor played by Chris Pine) and brings him on land. But unfortunately, he was followed by Nazis who start an attack on the island. After the battle, Steve tells the Amazons (forced by the lasso of Hestia) about the ongoing world war. Diana then decides to leave her home to stop the war.

Released on June 2, 2017, the film received many positive reviews praising the direction of the film, the performances, the action sequences, the soundtrack, and even the end credit design. It got the largest box office opening for a female-led comic book movie.

The success of the film showed that there is a market for female-led action heroes and there is a place for female directors in unconventional movie genres. The success of Wonder Woman will be very important for future projects that include women as the protagonist (heroine) of the film and the inclusion of more women in the creative teams as producers, directors, writers, etc.

While there may be some people that think it’s an exaggeration. Truth is that there are certain movie genres like action/ superheroes where we don’t see many female leads as we see many action heroes.

From the female-led movies that exist only a few, were well received by both the critics and the audiences (at the same time) like Sigourney Weaver in the Alien movie franchise, Uma Thurman in Kill Bill, Zoe fund in Ms. 45, and Gina Carano in Haywire.

It’s not that there aren’t enough stories.  on the contrary, there are many written pieces of literature (books, comic books) about strong female characters.  It’s really simple the action hero sells more because the male has been portrayed as the strongest providing and defending his family. For many years women have shown that they are able to provide for their families and defend them. Showing that they can work and deliver the same as men.

These are just a few movies we are mentioning but there are more. It is a scary position to take when you’re having something completely different from the rest but the results could be personally rewarding. There are many obstacles filmmakers face every day to make the movies they want to make. When they do and it’s something different we should go see it and evaluate it ourselves.

Most of the time the movies that are different, and are not well received by critics, need the support of the audience. We usually complain that we see most of the same thing. Right? When there is something different we should go watch it. Different could be bad but it also could be great.

What type of movie watcher are you? Are you risk-averse or risk-taker? Are you more comfortable with traditional filmmaking? Or are you open to new/ unconventional/ nontraditional concepts in movies? Feel free to leave your comments. I would love to hear from you.

12 thoughts on “Looking for something different in Fantasy Movies”