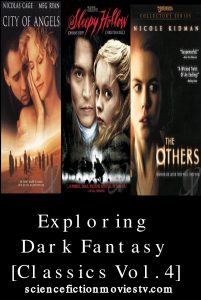 Like we have established in the previous installments of this series of Dark Fantasy Classics, the genre has been around for a while. This means that we have a long list of film titles which allows the exploration to be even more interesting.

Let’s continue with a film that is probably very familiar to many movie watchers because of its origins and its soundtrack.

City of Angels is a remake of Wings of Desire (1987), a film we previously discussed in Volume 2 of this series. Despite being a remake there are some differences compared to the original story. For example, instead of Germany, the story takes place in the Los Angeles, California, the United States known as the City of Angels. The film same as the original tells the story of an angel who wants to become human. Seth, played by Nicolas Cage is one of the angels watching over humans. When he falls in love with a woman named Maggie, played by Meg Ryan, he wishes to become human in order to be with Maggie.

The transformation of Seth from angel to human symbolizes the fallen angel but in this story, the fallen angel is not evil. The story emphasizes the importance of relationships, faith, and belief, and living life through experiences and feelings. The angels represent the age of reason, and learning and should desire to look into spiritual truths. Instead, physical experiences humans enjoy have more value to angels than the spiritual.

The film received mixed reviews but did very well at the box office. The film including its soundtrack was nominated for several awards. The two singles from the soundtrack the Goo Goo Dolls’ “Iris” and Alanis Morisette’s “Uninvited” were very popular then and managed to maintain their popularity through the years. One cannot deny the significance of the original version but with this film, we are able to see a different perspective of the same story.

Sleepy Hollow is based on the 1820 short story “The Legend of Sleepy Hollow” by Washington Irving. Ichabod Crane, played by Johnny Depp, is a New York City detective whose unorthodox techniques and penchant for gadgets make him unpopular with his colleagues. He is sent from New York City to investigate a series of murders in the village of Sleepy Hollow by a mysterious headless horseman.

Released on November 19, 1999, in the U.S. the film received mixed reviews but managed to do well at the box office. The film was nominated for the Academy Awards for Best Art Direction, Best Cinematography, and Best Costume Design and won for Best Art Direction. Following the legacy, a TV series with the same name was aired from 2013 to 2017. The series was loosely based on the 1820 short story with a few concepts from “Rip van Winkle” by Washington Irving. The series lasted 4 seasons of which the first three are the most interesting to watch.

The Others is a Spanish gothic horror film in the English language written and directed by Alejandro Amenabar. The film tells the story of Grace, played by Nicole Kidman, who is a young woman raising two children on her own during the final days of World War II, while she waits in vain for her beloved husband to return from the front. They live in a beautiful, Victorian mansion, the one place she believes them to be safe, but they are not really safe as she is convinced that her family home is haunted.

The film had different release dates for the U.S, Spain, Italy, and France. With a budget of approximately US$ 17 million, the film exceeded expectations collecting more than US$200 million at the box office. This supernatural horror film received positive reviews. Many praised how the film managed to be creepy without the need for expensive visual effects. The film was the first English language film ever to win the Best Film Award at Goyas, the Spain’s national film awards, without a single word of Spanish spoken in it. The film was nominated for many other awards including a BAFTA for Best Original Screenplay.

What do you think of these films? Which film would you choose to see first or have you seen any of these already? Feel free to leave your thoughts and comments in the comment section below.