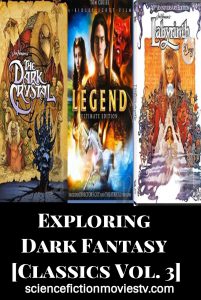 Dark Fantasy stories have been around for a while for many years. The stories of the Brothers Grimm are probably the most popular within the genre. But why are those stories so popular?

If we are talking about the Brothers Grimm in particular, their stories, well not really theirs since they are based on stories the brothers borrowed, have been modified to suit a younger audience. You know most of them as Disney stories. Probably knowing that these stories are based on darker stories made the Brothers Grimm more popular.

Even though Disney change the stories with a more optimistic and bright approach, the stories of the Brothers Grimm remained a fan favorite through books, movies, games, and TV series inspired by the genre. Yet, there are other less promoted dark fantasy stories, some inspired by the Brothers Gimm fairy tales,  that manage to establish a fan following and somehow survive against industry giants like Disney and remain a fan favorite over the years.

The beauty of these classics lies in the behind-the-scenes stories, the struggles the creators faced, and their legacy. Continuing the exploration of Dark Fantasy classics, this time we will look into some recommended fan-favorites we didn’t know about: 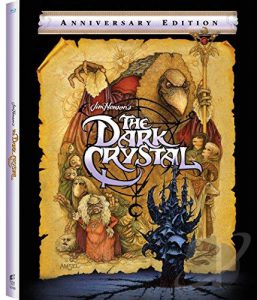 Starting with “The Dark Crystal”, the film tells the story of Jen, an elf-like gelfling, on a quest to restore the balance of his world by returning the lost shard of a powerful broken gem, “The Dark Crystal”. What’s so great about this movie? The characters in the film are puppets with no Jim Henson, resemblance to people or any specific species. At least that was the thought at that time. Written The film was considered the first live-action film without any live-action actor on screen. Animatronics were used for the film. At that time, around 1975 and 1976, the animatronics’ designs used for the film were considered impressive.

And the concept of showing an alien world with no humans was interesting. Initially, the creators wished to make the film using inspiration from the original Borothers Grimm’s fairy tales. Their stories as you probably know were a lot darker than the popular lighter fairy tales. The creators thought that it was unhealthy for children to never be afraid and not able to recognize hidden evil.

Each race had its own language based on for example ancient Egyptian, Serbo-Croatian, Polish, Russian, and other Slavic languages. For that time the use of animatronics was considered groundbreaking. Today, we don’t realize the amount of work that this technique requires in order to work properly. We probably can’t even imagine it since CGI made everything look so easy.

In order for the puppets to move human performers had to go inside of the suit which was in some cases dangerous and/or exhausting. The film has its own particular soundtrack which was composed by Trevor Jones. The film was released in the U.S., U.K., and France and faced some difficulties because of the story’s dark nature. Somehow during the marketing, it was sold as a family-friendly movie, like a Disney movie, which it wasn’t. It also had strong competition from Tootsie and E.T. The Extraterrestrial.

Despite all these difficulties it managed to generate some profit. Since it wasn’t well presented to the audience one can understand that it wouldn’t be popular with critics. The film received mixed reviews. Fortunately, it has earned better reviews in the following years, gaining new generation of fans. It eventually became a fan favorite in the fantasy genre. The legacy of the movie continues with the support of the fan following through books, board games, video games, music, comics and even perfumes.

There were rumors about a sequel, and apparently, there was even a screenplay ready. The unproduced screenplay was converted into a comic book series “The Power of the Dark Crystal” which was released in 2017. In 2017, it was announced that the Jim Henderson Company in cooperation with Netflix would produce a prequel series that will explore the world created for the movie. The series is titled “ The Dark Crystal: Age of Resistance”. 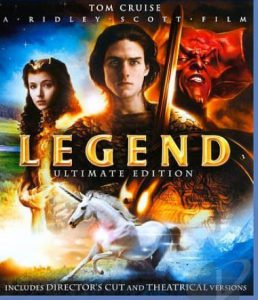 Compared to “The Dark Crystal” (1982) “Legend” (1985) is a darker fairy tale. The story follows princess Lili, played by Mia Sara, and forest dweller Jack, played by Tom Cruise, in their quest to save the unicorns from the Lord of Darkness, played by Tom Curry. The story is inspired by the classic fairy tales of the Brothers Grimm and directed by Ridley Scott. Yes, the Ridley Scott who worked on ‘Alien” and “Blade Runner”. Apparently, when he received the script, in the beginning, he wasn’t enthusiastic about it. He thought it would be an art film with limited audience appeal and left it to work on other projects.

After finalizing those projects, he came back to the idea of making the film. His idea was to create a dark-tone fairy tale with the style of Disney animation. He even offered the project to Disney but as one would expect they refused since it reflected the opposite of their family-friendly approach. In order to create the characters a lot of extensive makeup was used. Just imagine having to sit hours with make-up artists applying prosthetics on your face.

Tim Curry took around six hours to apply his makeup on his entire body. Just imagine having to go through that. Apparently, at one point, the actor got too impatient and claustrophobic and pulled off the make-up too quickly, tearing his own skin. If you know about Tom Cruise you wouldn’t be surprised to find out that even in the eighties he was already a risk-taker. He did all his own diving and swimming in waters that apparently had real alligators a few feet from where they were filming.

These kinds of behind-the-scenes stories make me appreciate the craft of filmmaking even more. People sometimes don’t realize the amount of effort it takes to create a film and that is why it is so heartbreaking when that effort is not recognized or acknowledged.  Here is where it gets more interesting, the film was tested and Scott himself decided to cut the film, from 125 minutes to 95 minutes for the European version and 89 minutes for the U.S. version. Yes, the film had two versions for release with two separate soundtracks. Who does that?

When you create a story and suddenly remove important parts from it, would the end result make sense? To me, it wouldn’t. This is a classic case of not trusting movie viewers but based on figures they didn’t have anything to rely on that would guarantee a profit. In the end, the film received mixed reviews. I guess some people tried to see what the creators were trying to tell, others were just confused and the rest simply didn’t like it. Fortunately, the positive reviews were mostly about Tim Curry’s performance. Knowing the hardships, it is great that his effort and suffering were somewhat recognized.

Unfortunately, I was not able to find the European version yet and I wished I could say that the U.S version isn’t that bad. But when you compare it to the director’s cut of 113 minutes, which was released in 2000, it is just a different story. I still don’t understand why it was done the way it was done. Fortunately, the film got recognized for the hard work done on Makeup and visual effect by receiving several award nominations including the Academy Award for Best Makeup. 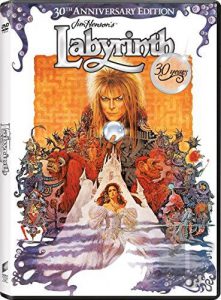 After “The Dark Crystal” Jim Henson, writer, and director continued his work with “Labyrinth”. This time he combined music with fantasy.  The Labyrinth is a musical fantasy film telling the story of a 15-year-old girl named Sara, played by Jennifer Connelly, who is on a quest to rescue her little brother Toby from the Goblin King, played by David Bowie. Connelly and Bowie were the only humans on screen, most of the film’s characters are played by puppeteers.

The story takes place within the labyrinth, a magical maze. The film has influences from “The Wizard of Oz”, “Alice in Wonderland”, “The Grimm’s Fairy Tales” and other literary works. This project was very important for Henson. Even his family members worked on the film. As mentioned before most of the characters in the film were puppets. However, compared to the Dark Crystal, Labyrinth does have a few computer-generated sequences like one of an owl. It was the first time that a realistic CGI animal was created for a film.

The soundtrack includes five recorded songs by David Bowie. Having such a big start in the film it is not surprising to know that they invested a lot in promoting the film. The promotion in the U.S was extensive but in the U.K the film managed to receive the royal treatment, having Charles, Prince of Wales, and Diana, Princess of Wales, attending the premiere on December 1, 1986. The film was released in other European countries like France, West Germany, Denmark, and Hungary. It even was released in Brazil. Despite all the coverage, the film didn’t succeed at the box office. Probably because of the extensive negative reviews it received. There were a few positive reviews that referred to the story of the film as a coming-of-age story.

It was difficult for Henson to continue working after facing these mixed reviews and the unsuccessful box office results. The film is marked as the last movie directed by Henson before his death in 1990. Fortunately, the film has been reevaluated by critics since Henson’s death and these reviews are for the majority completely different. The film is recognized as a masterpiece of puppetry and special effects. It’s ironic that in the beginning even the visual effects were considered a piece of trash; they are now referred to as gorgeous.

Nonetheless, it appeared that Henson was aware of the cult following of his movies “The Dark Crystal” and “Labyrinth” and was able to see that his work was appreciated at last. The film made its profit with home video sales. The legacy remains alive with stories released in books, comics, and video games that its cult following supports.

I have to be honest, I was not aware of these movies and I am glad these were recommended to me by a friend. I have asked around in my circles and there are others like me who also didn’t know about most of these movies. I believe it has to do with the fact that they weren’t well known until now, that we have social media and streaming services that provide us with unknown or new content from all parts of the world to all parts of the world.

It’s great to be able to see interesting movies that haven’t been promoted like others but still manage to gather a fan following. What do you think? Have you watched them already? Feel free to leave your thoughts in the comment section below.