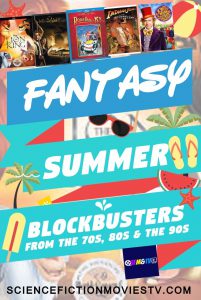 Fantasy is currently one of the most well-known movie genres and we couldn’t resist the temptation to also talk about the summer movies of this genre of the 70s, 80s, and the 90s in a similar way as we did for the sci-fi genre.

Believe it or not, Fantasy wasn’t very popular in the 70s which is somewhat strange since there was a successful reference to Mary Poppins from the sixties. Crime (The Godfather), Drama (Rocky), and Science Fiction (Star Wars) were the most dominant movie genres of that time.

In the 80s we started to see more Fantasy films and it was the 90s where the genre really became popular up until the 2000s.

While there are many good Fantasy films to mention here are the 5 best Fantasy summer movies of the late 20th Century:

Directed by Mel Stuart the movie is an adaptation of the novel “Charlie and the Chocolate Factory” by Roald Dahl. The movie tells the story of Charlie Bucket (played by Peter Ostrum) who receives a Golden Ticket to visit the chocolate factory of Willy Wonka (played by Gene Wilder). He attends and meets four other children at the factory.

Released on June 30, 1971 (US) the film received positive reviews from critics but it was not an immediate huge success. Willy Wonka & the Chocolate Factory became more popular because of its television broadcasting and home entertainment sales.

The film received an Academy Award nomination for Best Original Score. The film was selected in 2014 for preservation in the United States National Film Registry by the Library of Congress as being “culturally historically, or aesthetically significant.” If you have not seen it yet look for it and check it out. And don’t worry it is very different from the remake.

Directed by Steven Spielberg the film is the first movie in the Indiana Jones Franchise and was released on June 12, 1981. It tells the story of Indiana Jones (Harrison Ford) fight against Nazis who are searching for the Ark of the Covenant under the orders of Adolf Hitler who beliefs having the ark will make him and his army powerful.

Raiders of the Lost Ark has included in the US “Library of Congress” national film registry as for being “culturally historically, or aesthetically significant.” Many people consider this film to one of the greatest action-adventure films of all time and are often used as inspiration by many filmmakers to create new adventures.

Based on the novel “Who Censored Roger Rabbit” by Gary K. Wolf the story follows Roger Rabbit (voiced by Charles Fleischer) who is accused of murder and Eddie Valliant (Bob Hoskins), a private detective, who must solve the case to help Roger. The story takes place in the 1940s in Hollywood, where animated characters and humans co-exist. It is a brilliant combination of live-action and animation.

Who framed Roger Rabbit was released on June 22, 1988, and received critical acclaim and was commercially successful, becoming a summer blockbuster. In 2016, the film was selected for preservation in the United States National Film Registry by the Library of Congress as being “culturally historically, or aesthetically significant.”

Who framed Roger Rabbit won 3 Academy Awards: Best Sound Editing, Best Visual Effects, and Best Film Editing. It became the first animated film to win multiple Academy Awards since Mary Poppins in 1964. In addition, the film inspired many to learn more about animation which caused a rise of interest in the animation genre at that time.

Even though there are animated characters in the movie, the film is not a kid’s film. There are dark references, that may not be suitable for small children but as a fantasy action animated neo-noir film, it is a good film for age-appropriate watchers.

Released on June 14, 1994, the Lion King tells the story of Simba (a young lion) who will inherit his father’s title as king of the Pride Lands (Africa). His father (Mufasa) is murdered by Scar (Mufasa’s brother). Scar convinces Simba that the murder of his father was his own fault and convinces him to leave the kingdom. But he will not be alone on his journey. He will be interacting with some interesting characters and will learn to overcome his fears.

Next to being an animated film, The Lion King is also a musical. It received critical acclaim: many praised the movie for its engaging story, great music, and good animation. The film received four Academy Awards nominations and won two (Best Original Score and Best Original Song).

The success of the film made the way for the Lion King franchise including sequel films, animated television shows, video games, musical stage adaptations, and a CGI live-action remake (to release in 2019).

Lion King was selected in 2016 for preservation in the United States National Film Registry by the Library of Congress as being “culturally historically, or aesthetically significant.” It’s a great family film with memorable songs to sing along.

Directed by Stephen Summers this film is a loose remake of the 1932 film “The Mummy” with an Indiana Jones vibe. The film follows  Rick O’Connell played by Brendan Fraser who travels to Hammunaptra (City of the Dead) with librarian/archaeologist Evelyn Carnahan played by Rachel Weisz and her brother Jonathan Carnahan played by John Hannah.

There they find many interesting things including the Book of the Dead. When Evelyn couldn’t resist reading the book, all the crazy starts like bringing a mummy back to life (and not any Mummy other than the bringer of “undead and the seven plagues of Egypt” himself).

The Mummy was released on May 4, 1999, and was a huge success. The film received mixed reviews but that didn’t stop its success and for being nominated for the Academy Awards for Best Sound Mixing. The success of the film brought the start of the Mummy franchise with two sequel films, a prequel film (Scorpion King), video games, and a roller coaster ride in the Universal Studios Theme Parks.

Universal rebooted the franchise in 2017 with “The Mummy” as the first installment in the Dark Universe franchise. The new version has a completely different cinematic style and storyline but there is a quick reference to the Book of the Dead in this reboot. This version remains the favorite of many for its quirky comedy and great action sequences.

That was the top 5 Best Fantasy summer movies. It was somewhat difficult to compile a list of only 5 summer fantasy movies because the genre was not so popular in the past during summertime. Many successful fantasy films such as Toy Story were not released in the summer. Fortunately, the Fantasy movie genre has become more established later in the 21st century and successful even during the summertime.

For this selection, we took into consideration movies that were released during the summer that were successful, with an engaging story, great narrative, character development, and were liked by (most) critics.

Which fantasy film from the list would you chose as the best summer movie? Is there a film of the late 20th century that’s not on the list that you consider being the best Fantasy summer movie? Feel free to leave your comments. I would love to hear from you.