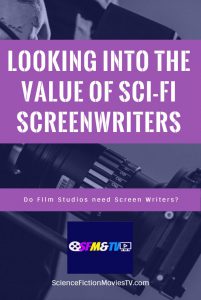 You may be wondering why this topic?

Well, let’s just say that Sci-Fi screenwriters have not been in the “spotlight” as they should. Meaning that people don’t realize how a writer’s contribution affects the success of a film.

Having a great actor on the set is not enough to ensure the success of a film.

Believe it or not, the success of a film is most of the time achieved because of a great team effort. What team you may ask?

The team that creates stories that will be projected on the big screen. This team usually consists of producers, directors, writers, actors, and a crew.

The ingredients to produce a good movie are the following: a good script, a director’s vision of the story, the crew to create the environment, and the right actors to execute the director’s vision. That sounds logical, right?

Teamwork is to a movie what a foundation is to a house. If you don’t have a good foundation you will have problems you won’t be able to fix.

The Case of the 2007-08 Writers Guild of America Strike

So if the role of screenwriters in the process of creating a good movie is important, why were the writers in Hollywood in 2007-08 not paid enough to the point that the Writers Guild of America strike took place?

While it is understandable that writers have the right to demand better pays, it should be noted that while they are on strike they are not allowed to write or rewrite any scripts for the duration of the strike according to the Writers Guild regulations.

As expected the strike had consequences for the 2009 summer movies. Most of these movies were already in the planning phase when the strike started. For the writers that were closely attached to their projects, one can just imagine how they felt: divided between following the regulations and wanting their projects to succeed.

The scripts were not finished and actors and directors had to improvise a storyline which most of the time was not their strongest skill. However, there were directors who were also writers that we’re able to complete the story. But in most cases, it was like asking a chef to represent you as your lawyer in court. Not a good idea!

Scripts were created in a short period of time. Most of the “finished” scripts were considered a first draft. And since there was no other option available the first draft was considered the final version of the script.

The strike of 2007-08 provided a great example of what happens with films when there is no good writing (or no writing at all). It gave us an opportunity to reflect and think about the value of writing and its importance in Sci-Fi films.

In the end, it’s a team effort and every player should have equal rights and if everything is going well they have the right to receive benefits from it. However, it seems that we don’t learn from our mistakes as again this year (2017) there was a risk of a strike about the same issue.

When judging films we should remember that it has been a team effort and that generalizing when you’re criticizing is not fair. Even though the teams didn’t always score a successful film, credit should be given to the team players who did well.

Good Sci-Fi movies & TV shows will be produced if the whole team (including the writers) works at the same level: by having the same goal, vision and having equal opportunities.

Moviegoers are constantly evolving in the way they watch movies and good content is becoming more and more important. Having good content is a result of writing good scripts so writers definitely have importance in the process of filmmaking.

Unfortunately most of the time this “importance” is overlooked by the monetary aspect related to the project. Hopefully, we will see a change soon as Netflix, Amazon, and other streaming services are focusing on good content and creating competition for film studios. Sooner or later film studios will acknowledge the value of their writers.

When watching a movie are you paying attention to the flow of the story and how everything falls into place in the storyline? Have you ever thought of writing as the cause of a movie not being good enough? Feel free to leave your comments. I would love to hear from you.

10 thoughts on “Looking into the Value of Sci-Fi Screenwriters”