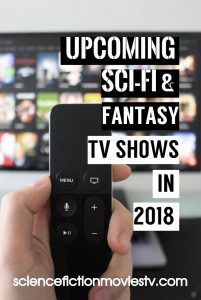 For all Sci-Fi and Fantasy out there, 2018 appears to be a year full of interesting concepts on TV.

Technically the sci-fi series already aired on channel 4 in the U.K. last year but those who have access to Amazon Video it is airing in January 2018. The series is based on the novels of Philips K. Dick which include stories about monopolistic corporations, authoritarian governments, and alternative universes. There is a lot to explore from this work which is why I think they choose to have stand-alone episodes. The first season consists of ten episodes and is currently airing on Amazon Video.

A retired superhero is forced to become a vigilante again when the rise of the local gang leads to increased crime and corruption in his community. The series is based on the DC comic character of the same name and will air on the CW starting January 2018.

This was a Sci-Fi anthology series of which only the pilot episode was aired on Amazon Video in 2017. The pilot got excellent reviews but we never watched season 1 in 2017. We hope Amazon air it in 2018. The series is based on the cult-hit novel The Book of Strange New Things by Michel Faber.

In 2032, the society has largely collapsed and there is a shortage of food and supplies. The USIC Corporation was able to find a colony on a desert-like exoplanet. A chaplain is contacted by a USIC executive and is asked to go to the colony. There he is confronted with very strange circumstances.

Based on the comic book “The Tick” the series will be a strange blue superhero, which comes to the city to help combat crime and uncover the mysterious figure behind the city’s underworld. A young man with no superpowers becomes his sidekick. The show will air on Amazon Video on February 23, 2018.

This Sci-Fi drama thriller tells the story of Howard Silk, a UN employee, discovers the agency he works for, is hiding a gateway to a parallel dimension. The pilot aired on December 10, 2017. The second episode will air on February 28, 2018, on Starz.

The series is based on the 2002 novel of the same name written by Richard K. Morgan. In the future, the human consciousness is digitized and stored in cortical stacks that are implanted in the spine. This allows humans to survive physical death by having their memories and consciousness re-sleeved into new bodies. A trained soldier is downloaded from an off-world prison into the body of a cop, thanks to a highly influential autocrat who was recently murdered. His last back up has no memory of what happened and wants the soldier/cop to investigate what happened. The series will air on Netflix in February this year.

Two police officers with different perspectives are forced to work together on a case which appears to be the murder of a hacker in London. During their investigation, they find proof that due to a mysterious cosmic event, the world is facing certain destruction in five years. However, the higher up very much like to keep it secret. After that, M15 operatives are sent to pursue the duo to silence them. This Sci-Fi crime drama show is currently curing on BBC One and will air on Hulu on March 7, 2018.

Ever wonder about the background story of Superman’s family on Krypton? What Krypton looks like? The series will show Superman’s grandfather Seg-el as he fights to redeem his family’s honor and fight for justice to save his beloved world from chaos. The show will air on SyFy on March 21, 2018.

Refugees from a war-torn country start showing up to seek asylum in an American town. Only the country these people are from is America and the war they are escaping from is 250 years in the future. This sci-fi thriller series will air on ABC on April 2, 2018.

The show is a reboot of the 1965 series following the adventures of the Robinson family on the spaceship Jupiter 2 who encounter a rip in space-time and crash on an unknown planet. There they have to adapt to a new environment and survive while they figure out a way to leave the planet. The show will air on Netflix April 13, 2018.

The series created by J.J. Abrams will start an epic saga of darkness and light, based on the stories of Stephen King intertwining characters and themes from the fictional town of Castle Rock. Some of the titles and characters that will be mention in the series include It, Dolores Claiborne, Salem’s Lot, Shawshank Redemption, Dreamcatcher, the Shinning, the Green Mile and many others.

Based on the novel “Good Omens: The Nice and Accurate Prophecies of Agnes Nutter, Witch” written by Terry Pratchett and Neil Gaiman the series will tell a tale of the coming of the end of times featuring an angel, a demon, an 11-year-old antichrist and a witch. The comedic apocalyptic six-part limited series will air on Amazon Video and BBC.

The show is based on the Marvel Comics characters of the same and shares continuity with the Marvel film and television series. What’s the series about? Two teenagers from two different background, acquire superpowers while forming a romantic relationship. The show will air on Freeform on June 7, 2018.

A discovery of Witches (Sky One)

After accidentally finding a lost manuscript, Diana, a history professor, is compelled to embrace the magic in her blood and solve the mysteries around Ashmole 782. She will receive help from Matthew, a vampire.

Based on the fantasy books written by Andrzej Sapkowski and the video game franchise of the same name, the series will follow the story of Geralt, one of the last remaining Witchers, a group of monster hunters with supernatural powers, who struggles to find his place in a world where humans often prove to be more wicked than the monsters they hunt.

Based on the DC comic book “ The New Teen Titans”, the live-action series follows a group of young soon-to-be superheroes. In the series, Dick Grayson emerges from the shadows to become the leader of this group of new heroes including Starfire, Raven, Cyborg and many others. The Group is well known since the animated version Teen Titans were aired on the Cartoon Network.

These are the series that will start in 2018. There is a great variety for all sci-fi tastes including superhero, parallel universes, horror, comedy time travel, and the supernatural. Which one of these series are you most excited to see?  Feel free to leave your comments. I would love to hear from you.