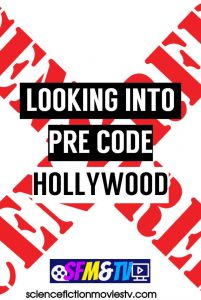 While researching about the Universal Monsters Universe I came across the term Pre-Code in the description of the movies that were released in the 1930s.

What is this Pre-Code then?

According to the internet the Pre-Code era happened between 1929 (during the widespread adaptation of sound in pictures) and 1934(when the Motion Picture Production Code censorship guidelines referred to as the “Hays Code” was enforced). The code was officially adopted in 1930, but it was not enforced until July 1, 1932, during the establishment of the Promotion Code Administration (PCA).Before these guidelines were created, film content was restricted only by the local laws, popular opinion, and the negotiations between the Studio Relations Committee (SRC).

Filmmakers, however, continued to ignore the “Hays Code” while producing films which still featured themes of sexual innuendo, profanity, intense violence, mixing of different racial groups, homosexuality, strong female characters and other mature themes. The increasing prominence of these features triggered protests from religious groups who organized campaigns against what they considered as immorality in the American cinema.

Origins of the Code

The “Hays Code” is named after William. H. Hays who pioneered the concept as early as 1922, others continued his work, and the final version of the code was eventually developed. The code was created to prevent the direct involvement of the government in the cinema and film industry. It was divided into two distinct principles known as the general principles of morality and the particular application principles. To further enhance its application, some unwritten restrictions which were believed to be understood were also applied. Such as the ban on homosexuality and the use of curse words which were not written in the code but were acknowledged as some of the unwritten features to avoid during filmmaking.

The code was not only developed to determine what could be portrayed on the screen but also to promote traditional values by consciously avoiding the portrayal of having sexual relations without being married as acceptable, perpetrators of criminal acts should be punished and not compensated, authority figures should be respected and personalities in the clergy should not be portrayed as villains. At that time, this level of censorship was thought to be too restrictive and old-fashioned. After all, if the clergy was only represented positively, there will be no chance to examine their shortcomings. Right?

The decision made by the studios to create a code didn’t happen overnight. In the 1920s, the films featured topless scenes, sexually suggestive dialogue, frequent use of curse words and other mature content. The censorship at a state level still existed at that time but it wall all about banning films, and the deletion of scenes which made the film storyline incomprehensible. Many religious groups which actively campaigned against the studios because of the inappropriate content in the films began to realize that it was indeed going to be an expensive battle and they considered the possibility of government intervention. But why was the Code ignored?

The influence of the Great Depression

The code of standards was eventually submitted in 1929, but the conditions stated in the Code were accepted by the studios in the 1930s. However, the code was still ignored, why? After the crash in the stock markets which occurred in 1929, the Great Depression began. This was a period during which the American values and beliefs were changed. The American public became more cynical, expressing defiance to traditional beliefs and politics. And some of these reactions were depicted in the Hollywood films which had themes related to the economic situation due to the depression at that time.

The carefree style which characterized films created in the 1920s transitioned into a conscious effort to create films which had more social relevance and political orientation, but the studios continued to make films based on gangsters, crime, cynical comedy and overly sexualized stories regarding mature content. During this period, there was also an increase in the production of Horror films.

The censors did not pay particular interest to the horror genre like the other genres until the sound horror films were produced. The atmospheric music, creepy dialogue, and sound effects had a significant impact on the audience; there were actually people who fainted in the theaters due to fright. The Hays Code did not acknowledge gruesomeness in its content. Thus the horror filmmakers took advantage of this oversight. But they still had to convince the State Boards to approve their films; because the State Boards could censor any material, it found to be indecent.

The studios continued to produce different kinds of films due to the absence of an official oversight in the Code. Some studios made attempts to adhere to the Code, and their efforts later paid off when the implementation of the code became stricter. The films that were produced between 1929 and 1934 are referred to as the Pre-Code films.

The religious groups reacted by organizing protests and boycotting the screening of these films. The Catholic Legion of Decency (which was later called the National Legion of Decency) was established to control and enforce decency standards while advocating the boycott of films which they regarded as indecent. These protests created a tense social environment that compelled the government to become involved. At one point, the studios were made to acknowledge the PCA and agree to impose a fine for the production, distribution or exhibition of films without approval from the PCA. Studios formed relationships with reputable people in the religious groups to resolve their differences.

The Legion played a prominent role in the strict enforcement of the Code which began in 1934, but the general public did not successfully accept it. The audience went against the recommendations of the legion. Every time the Legion condemned a film, the public turn out to see the film at the theaters was massive. After the strict enforcement of the Code, many pre-code films were reissued after they had complied with the code by cutting inappropriate scenes.

By reading about the film industry at that time, it is easy to understand why there had to be a Code because the movies did not have a rating system that is active today. The films were available to everyone who could afford to buy and watch them. The success of the Code relied on compliance, but we understand how this was influenced by the Great Depression. It is also interesting to note that the Legions targeted specific films while others such as the Baby Burlesque series and many Shirley Temple movies were passed without judgment.

These movies were considered as entertaining at that time, but the actors displayed a very strange behavior which should have been considered inappropriate for general public viewing. Where were the oversight and the protest? Guidelines were needed to prevent a free for all, but even after 1934 the application and oversight of the code were not effective. It created a barrier for filmmakers who wanted to tell a story about controversial topics by cutting scenes that were found offensive but allowed films with subliminal and/or inappropriate messages to pass. Critics in the U.S. who had the courage to comment on the obvious were either portrayed as villains or their careers were influenced one way or the other. It’s just crazy.

That was a lot of information, right? As they say “You learn something new every day.” Learning about new things gives you more knowledge that will help you take better decisions in the future and not be blindingly convinced to follow the herd. I imagine there is much more information on this subject to discuss but I will leave it here for now.

I hope this was as informative to you as it was for me. Want to share your thoughts? Or do you have additional information to share? Feel free to leave your comments in the comment section below.

6 thoughts on “Looking into Pre-Code Hollywood”